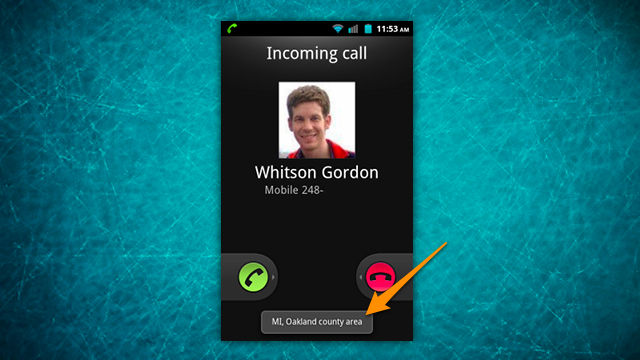 If you have an Android and it’s fresh out of the box, what is the most infuriating thing in the world besides battery suckage? Not knowing who is calling, I mean, what on earth happened to the days when phones (Treos, anyone?) told you where someone was calling from. I will answer calls from Seattle without knowing who it is, but there’s no way I’m answering a call from Arkansas (sorry, Arkansas) because it’s probably someone selling me something or asking if I know where my cousin is because she owes the furniture rental place money. Enter Caller Info which is officially the droid (app) you and I were looking for.

“Caller Info doesn’t show you where the call is coming from, per se—it just shows where the area code is from,” said Lifehacker’s Gordon Whitson (pictured above). “So, it isn’t a creepy way to pinpoint someone’s location, but rather a way to see that if a call is coming from Minnesota, and you only know one person from Minnesota, that you can determine who’s calling you. Caller Info also lets you look up area codes on demand from the app’s minimal interface, on the off chance you missed the call. It’s a really handy little app to have, if you run into this problem often.”

In this article:android app, smartphones