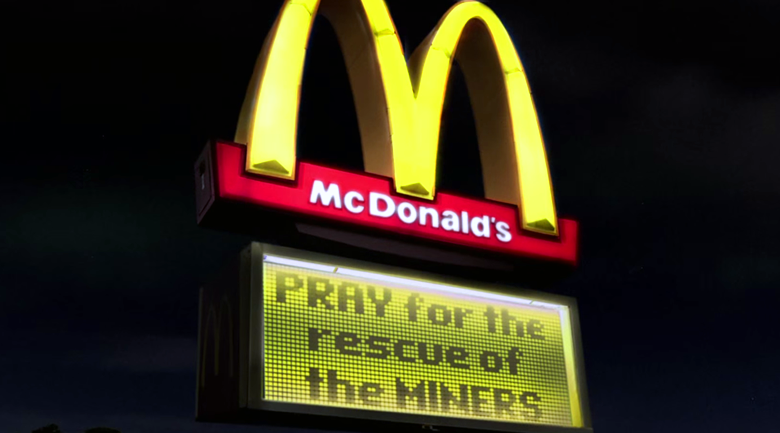 On an average day, the yellow sign accompanying McDonald’s golden arches will bear a message advertising the newest sandwich or lunch special. Yet from time to time, these signs are used to send blessings and messages of hope to the community. A new ad released this week (embedded below) features images of McDonald’s signs during natural disasters or tragedies such as the Boston Marathon bombing and signs announcing prayers for veterans, personal congratulations and birthday wishes to members of the community, and inspirational messages.

An accompanying Tumblr site includes more detailed stories of several of the signs, and divides the video montage into three separate videos, “Disasters,” “Welcome Home,” in praise of veterans, and “Names,” which shows personal messages congratulating community members on personal occasions such as birthdays, new babies, and anniversaries. The videos also express how McDonald’s has reached out to people in communities during difficult times.

Some viewers found the new ad touching, while others accused the company of tastelessly attaching itself to war and disaster, the memories of which are far from heart-warming for those who lived through them. A Consumerist poll shows that while 28 percent of viewers approve of McDonald’s new ad campaign, 41 percent are “not lovin’ it,” while an additional 30 percent are just grateful to have DVR so that they don’t have to watch the commercial at all.

Several weighed in on the ad calling it “creative and heartwarming,” but they appear to be in the minority. Considering that poor diet contributes to 30 to 40 percent of all cancers, the picture of the golden arches gone pink to promote breast cancer awareness is particularly eye-roll worthy, if not downright offensive to many. And an image of a sign emerging from the floodwaters of a disasterous storm in Watseka, Illinois reading “We Will Be Back Soon” prompted one snarky Twitter user to respond: “McDonalds will be standing long after the apocalypse kills the rest of us.”

With McDonald’s making massive profits by corporatizing small towns, and with its long history of questionable ethics, critical consumers are unlikely to be charmed by the restaurant’s claims of community support. The Tumblr site’s descriptions of McDonald’s community service are vague at best, utterly failing to provide genuine examples. The claim that McDonald’s has “rallied to support local community members in times of celebration and struggle, mourning and triumph” gives us little details as to what this support actually looks like. More descriptive is the “Welcome Home” video, where McDonald’s brags about providing returning veterans with “discounts, career opportunities and their first taste of home.” Fight in a war, come home for a Big Mac coupon and a job at the fry station? Gee, thanks McDonald’s.