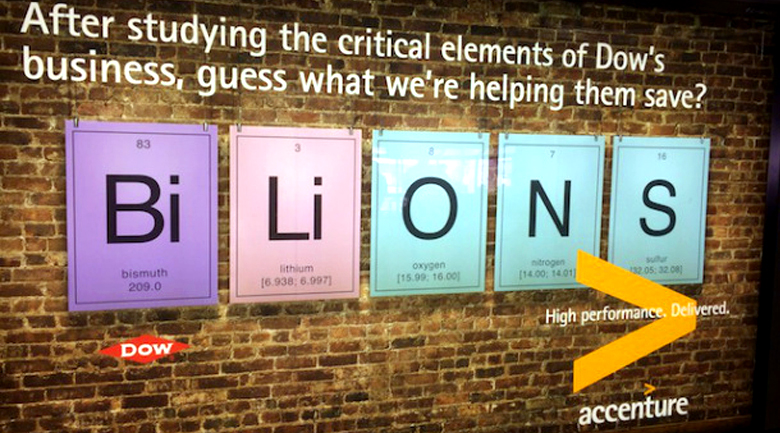 We all know that marketing that makes someone think or laugh is far more memorable than standard branding. Giving people a reason to interact with or remember your brand can go much further, but every now and then, even large companies can attempt humor and fail.

In fact, sometimes when a brand tries to be clever, it becomes hilarious. But not because the ad is funny, but because of the unintended consequences.

Consumerist.com has highlighted an Accenture ad in the Dallas-Fort Worth International Airport, as seen above. This airport is one of the top five busiest airports in the nation, and it appears that they are extremely concerned with saving BI LIONS.

BI LIONS? Obviously, people are laughing because the clever element tiles from the periodic table appears to say BIsexual LIONS since there is no “L” element to make it say “BILLIONS.”

Is it an oops? Was someone on the marketing team stubborn and hoping people would read quickly and gloss over it, or is this evil genius to get smart alecs like us to feature their ad and talk about it in front of millions of people?

Should you be clever?

Although we don’t believe this to be an attempt at humor, rather an attempt at being clever (a failed attempt, in our opinion), it is eye catching, if for no other reason than it makes you stop and question whether you, the passerby can’t read well, or if they can’t spell well.

If you want to be clever, don’t give people an opportunity to make fun of you – go ahead and be outright clever, perhaps even humorous. After all, it is a tactic used by brands of all sizes to be more memorable. But in this case, someone stuck to their guns and shouldn’t have – this is actually pretty hilarious.