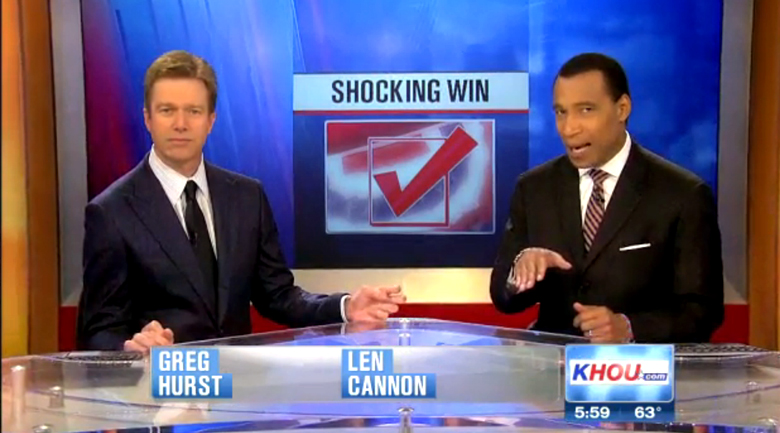 Dave Wilson has just won his campaign for a six-year term on the Houston Community College board, which he openly admits is because his marketing was vague and allowed voters in the primarily African American district to believe that he too was black. “I’d always said it was a long shot,” he tells KHOU, adding the he never expected to win.

Known as a trouble maker and often referred to has a “hate monger” in the community for his anti-gay position and stating publicly that he would like to bring chain gangs back to Houston highways to clean up litter.

He clearly entertained himself while running by sending out mailers featuring black families, supportive black voters, and an apparent endorsement by Ron Wilson, which is Dave Wilson’s cousin (as stated on the mailers) who lives in Iowa, but not the former state representative who is black and also named Ron Wilson.

Winning by only 26 votes

Dave Wilson chuckles at the tricks but notes that there are “shenanigans” going on in the HCC system, and he does care about cleaning up what he perceives to be a mess.

Although he never said he is black, his marketing strategy challenged the idea that one must be black to win in a black district, a tactic Bruce Austin, the unseated 24-year incumbent calls “disgusting.”

Austin sent his own mailers out with Wilson’s face calling him a “right-wing hate monger,” but was unable to sway many in the district. Wilson beat Austin by only 26 votes, leading Austin to call for a recount, which KHOU points out will likely affirm Wilson’s win given that all voting is electronic.

So, is it genius or evil?

Analysts note that Wilson’s mailers may be less to blame for Austin’s loss, likely having more to do with questionable insider business deals and overseas spending, along with generally poor performance.

The question remains, however – if the mailers were the reason for the win, was this genius marketing or pure evil? Tell us in the comments below what you think.

Watch KHOU’s interview with Wilson below:

In this article:advertising, Marketing, politics