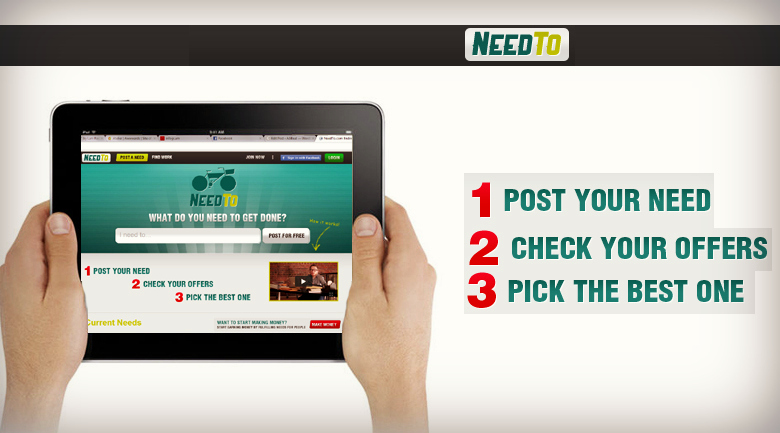 Austinite Wade Floyd has always been an extremely hard worker, starting with his summer job at age 19 selling books door to door on commission, earning over $6k in his first summer, then began training college students for summer jobs and spent the next 15 years recruiting and teaching sales skills to college kids.

With over 1200 people already registered on the site and over 300 jobs posted, Floyd is still manually checking every single listing, and when a task does not have enough bids, he takes it upon himself to pop open the yellow pages and help make those connections. He is realistic and knows this will not always be possible, but during his beta phase, he is very obviously obsessing over every single interaction and transaction on the site.

So far, he has seen nearly one in three jobs repeat, with early adopters showing a high satisfaction level with the site and using it again. The company is currently undergoing an entire code re-write and will soon roll out to the public. Floyd tells AGBeat that there are new features on the way, like detailed profiles, badges for profiles (background check badges, veteran badges, college badges, etc.), a new payment system and in the next version, the company plans to innovate by adding an escrow option to secure both sides (which any Craigslist user can attest is a sadly absent element from any web transaction).

[ba-pullquote align=”left”]”Floyd places a great deal of emphasis on philanthropy, dedicating one out of every ten dollars made to charity.”[/ba-pullquote]Soon, the company will roll out pinpoint mapping to show nearby service providers, must like airbnb.com, and will offer a location-based check-in and check-out system, like Gowalla for service providers so that consumers can see what area people most often do jobs in, and theoretically when a provider has checked in or out of their location.

Philanthropy and pounding the pavement

Floyd places a great deal of emphasis on philanthropy, dedicating one out of every ten dollars made to charity. Floyd is an inspirational business leader who is never willing to settle for a consumer having a less than stellar experience, he leaves his desk to pound the pavement, and is fearless in his plans for growth which he is both realistic but enthusiastic about.

As he obsesses over every detail, he is keenly aware that in order to scale, the system will have to be to his standards to allow it to take over his part in the process, but prior to launch, he has touched every transaction in some way – an extremely rare claim of any tech startup.