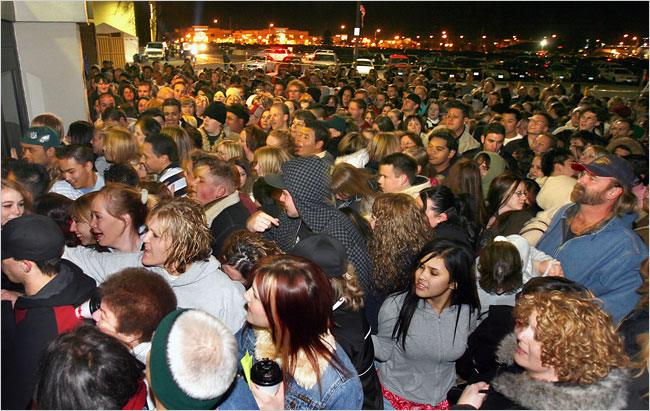 The numbers are in and it appears that Black Friday sales did not meet expectations. ShopperTrack projected sales would hit $11.4 billion during this year’s Black Friday sales, but consumers hit just shy of that mark purchasing $11.2 billion in goods during their battles in the aisles. This number is down 1.8 percent from last year’s total, but there were many changes this holiday season that likely have to do with the lesser growth in brick-and-mortar retail sales.

Many retailers, such as Target and BestBuy, began their sales on Thursday evening, perhaps enticing consumers away from their dinners a little earlier than normal to beat the madness that ensues on Black Friday. These earlier sales were also available online, persuading consumers to break out their laptops and tablets to peruse early deals. This early availability detracted from sales normally estimated for Black Friday.

And while some would think starting sales earlier would lead to more sales overall, consumer budgets aren’t any deeper than they would be if retailers had decided not to begin sales until Black Friday. It just means they run through their shopping budget a bit faster and are actually less likely to shop going into the post-Thanksgiving weekend.

Brick-and-mortar stores often rely on Black Friday sales to make up to 40 percent of their annual revenues. With many consumers opting to shop online – U.S. consumers hit a record this year, spending over $1 billion in online sales – it detracts from the amount of sales made in-store. Approximately 57 million Americans did Black Friday shopping online this year, which is an 18 percent increase from last year’s numbers.

Because of the switches made this year, it will be interesting to get final totals for pre-Thanksgiving sales up through Cyber Monday to see if in fact, the combined numbers are an increase from year’s past. If there is an increase, consumer spending during Thanksgiving will no longer focus solely on Black Friday, but rather, a five day span of retailer deals.

In this article:Consumerism, retail, shopping trends