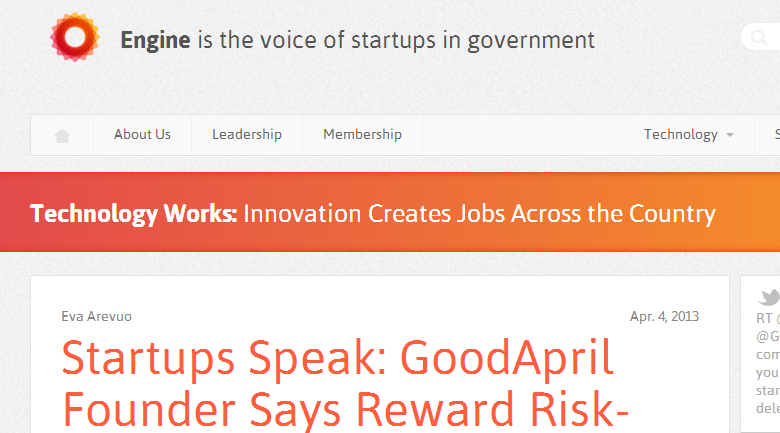 There’s truth to the saying that there is power in numbers. Most radical changes come about because bands of people come together and unite under a single cause in order to effect change. Revolutions and movements are less likely to catch the eyes of the people you’re trying to reach without a number of voices backing you.

Engine is an organization that brings startup business owners, investors and entrepreneurs together in order to educate them on laws and proposals that can affect their businesses, encourage discussions and transport any ideas, thoughts or grievances voiced in this community to the government officials that can do something about them.

The startup culture is founded in innovative thinking, and new companies have been able to flourish so far due to the freedoms that exist today. In order to maintain this continuous growth, Engine works to stay vigilant on news coming out of Washington D.C., and maintain constant contact with government officials in order to make their concerns known and have them addressed.

A quote taken from Engine’s website further explains their mission: “To stay relevant, competitive, and prosperous, our government and our businesses must act in partnership. Engine promotes an agenda based on good data used to educate and connect communities, and links those communities through building essential relationships to deepen understanding. Working together, startups and policymakers can change the course of the nation.”

In order to strengthen these relationships, the organization works to create more efficiency in communicating with local, state and government officials. If several business owners are all having the same thoughts and concerns, it’s more effective to pool those together and amplify the argument, rather than produce one sporadic outcry here and there.

In this respect, Engine operates as the megaphone for small business owners and startups, serving as a conduit for discussions between entrepreneurs and government officials who make the laws that affect those industries. The organization ultimately helps to get their messages a little bit closer to the government’s ears.