When considering which company to work for, is happiness a big factor in that decision? Of course one has to consider salary, commute, growth opportunities, benefits and a myriad of other thing – but once you have those things hammered out, and start the job, would you describe the company as a happy place?

CareerBliss recently released its list of the happiest tech companies of 2013. Companies submitted surveys back in 2012 and had to have at least 25 tech employees’ reviews in order to be considered. Scores were given in a range of 1-5, measuring employee career satisfaction based on their perceptions of management, growth opportunities and the company culture. 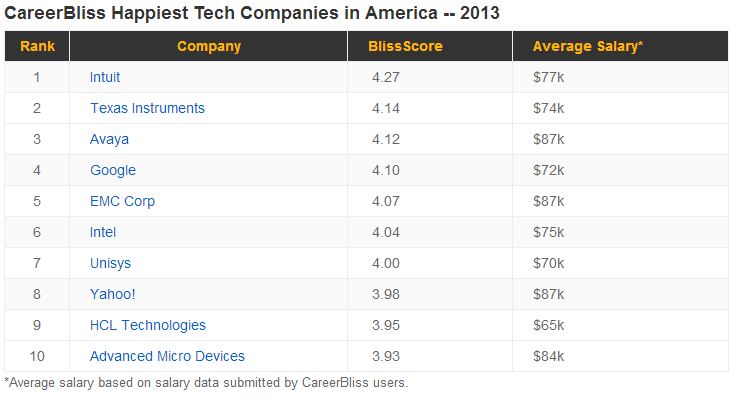 Intuit tops out as the happiest tech company of 2013, with a BlissScore of 4.27 with CareerBliss users reporting an average salary of $77,000 per year. Headquartered in Mountain View, California, employees of the company rank senior management, great work-life balance, benefits and compensation as reasons why they are happy with the company – scoring each of these categories as 4. A review from datacenter manager for the company reads: “You mattered to the company and to the clients. The CEO never made you feel that your opinion didn’t count. You wanted to make the company succeed. The benefits and rewards made you want to go to work each day.”

“It’s interesting to note that Intuit was not the company with the highest reported salary on CareerBliss, yet it still came out as the top-ranked happiest company. Of course there are caveats to this ranking in that it is based only on the employees that chose to come to the CareerBliss site and give a review – and in a lot of situations, people only give reviews when they want to express dissatisfaction, which could be why other companies are not on the list.

But by solely focusing on the numbers that were submitted, a higher salary didn’t automatically equate to a corresponding level of happiness for CareerBliss users. It’s apparent that users considered a mix of factor in addition to salary that ultimately determined their level of happiness. One Intuit reviewer pointed to their ability to work from home as one of the reasons that this person loved their job.

Because these surveys were submitted in 2012, it will be interesting to see if Yahoo holds its number 8 spot as one of the top happiest tech companies, and if Yahoo CareerBliss users that were once allowed to work from home full-time will be just as happy with no longer having this option.

In this article:happiness at work, professional happiness, tech employees