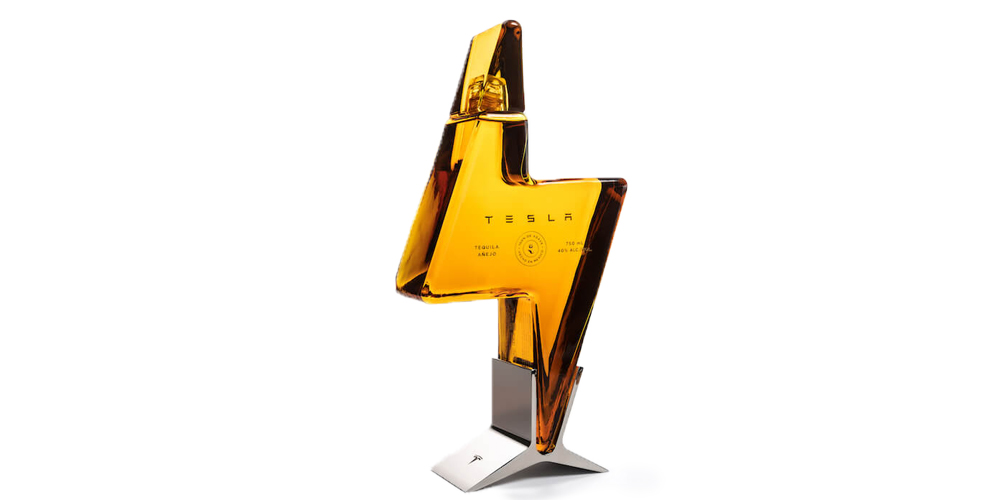 As if Tesla wasn’t already one of the coolest brands on the block, they’re amping up cool points with the release of Tesla Tequila. Before you get too excited, it’s already sold out.

According to Tesla’s website, Tesla Tequila, an exclusive, premium 100% de agave tequila añejo aged in French oak barrels, featuring a dry fruit and light vanilla nose with a balanced cinnamon pepper finish. It’s 750mL and 40 percent ABV, and is (well, was) only available in select U.S. states. Deliveries are expected to begin in late 2020.

The $250 (with shipping generously included) tequila is produced by Nosotros Tequila and fulfilled by Speakeasy Co. The bottle – which is shaped like a lightning bolt – has the sleek look of a Tesla product. Tesla allowed for two bottles maximum to be purchased per customer, and the stock ran out in a matter of hours. An “out of stock” button now appears on the shop page.

According to Fast Company, “Tesla CEO Elon Musk floated the idea of a Tesla-branded tequila in an apparent April Fools’ Day joke in 2018, tweeting, “Elon was found passed out against a Tesla Model 3, surrounded by ‘Teslaquilla’ bottles, the tracks of dried tears still visible on his cheeks.”” A tequila mockup was later teased by Musk on Twitter in late 2018 when he tweeted, “Teslaquila coming soon …”

After his infamous appearance on The Joe Rogan Experience when he partook in some greener products and naming his child X Æ A-12, Musk and his brand have become viewed by some as eccentric; but this doesn’t seem to be slowing him (or Tesla) down one bit.

It is not currently clear when and if Tesla will be restocking the tequila, and remnants have already gone up (with some selling out) on eBay – at outrageous markups, naturally – with empty bottles and stands selling for hundreds of dollars.

What do you think – is this a lightning bolt flash in the pan, or could they be onto something similar to what George Clooney has done with Casamigos?

In this article:Marketing, tequila, tesla, The News