Trouble on the horizon

A new Bank of America report has some very worrying news for the tech industry. Titled “Occupy Silicon Valley,” the report is a sort of socio-economic risk analysis study that warns of troubles ahead.

Except, the troubles will not come from foreign hackers, or an encroaching federal government, but from Main Street America.

Backlash to this growing inequality, now largely directed at politicians in DC and investment bankers in Wall Street, will soon engulf the Valley billionaires and their tech minions, the study warns.

Michael Hartnett, chief investment strategist with Bank of America, put the issue in perspective by noting that the market values of tech giants already surpass the gross domestic product of large cities. “Google is bigger than Chicago[‘s GDP], Amazon is bigger than Washington[‘s GDP],” he wrote.

For example, just Google and Apple put together is worth more than the combined market value of Japanese and Eurozone financial companies. 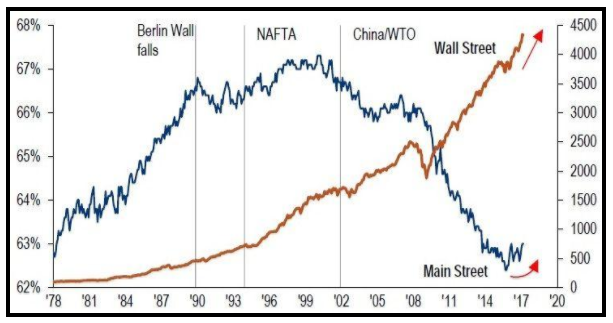 The future is only going to get brighter

In fact, by all accounts we are on the verge of a revolution in AI that would unleash more automation—from self-driven cars to Wall Street betting bots to auto-coding. Seismic shifts will disrupt jobs on a massive scale, and even high skilled laborers are at risk of losing means of employment. Wealth would further flow to the hands of a few.

The stock market reflects this bright future: NASDAQ Internet Index is up 25.6 percent this year versus about 7 percent for the Standard & Poor’s 500 index.

The report predicts that this scenario would “ultimately lead to populist calls for redistribution of the increasingly concentrated wealth of Silicon Valley as the gap between tech capital and human capital grows ever wider.”

For now, the protests have been scattered and momentary flairs—the Google-bus blockades, protests against Uber’s presence in Oakland, and so on.

There has also been populist backlash against the tech industry for its lack of accountability.

Many see this as the struggle between the new, modern America versus the old, backward America. Silicon Valley vs. Ohio Valley. However, that scenario will change soon. For worse, much worse.

An already highly area of tension between the long-term residents and new tech wave is over the issue of rent control. Voters in Mountain View (Google’s headquarters) and Richmond approved rent- and eviction-control measures in November. Santa Rosa will vote in June. San Jose’s City Council voted last month to implement eviction controls, and Pacifica’s council approved a temporary rent- and eviction-control ordinance that will take effect Wednesday.

Rent control may necessitate higher taxes, which would mean policy responses inimical to the tech interests: “When the government is short of revenue, they will look at places that have a lot of revenue. We know where a lot of that is right now,” the report notes.

The disconnect between an S&P 500 led by technology and the global economy “is ultimately unsustainable,” warns the report. Occupy Silicon Valley may not be far away.

Whether the protests lead to useful policy prescriptions is an entirely different question.

JobTrack is the CRM job seekers should capitalize on