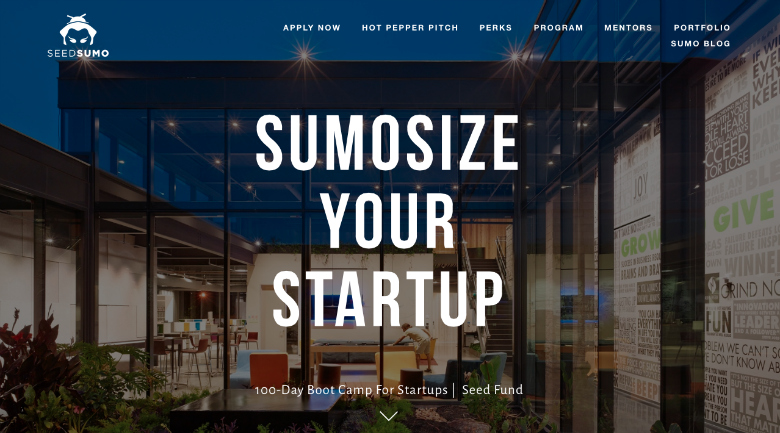 Most people know Bryan, Texas as the home of Texas A&M University, but as a Longhorn (hook ’em!), we’re more excited about the city’s bragging rights to international startup accelerator, SeedSumo.

Today, the accelerator is unveiling their second annual accelerator class, comprised of eight companies that will begin the program on May 20th, and they will participate in for three months. They’ll be exposed to intensive mentoring, business model design, and a twist on demo day for investors.

Seed Sumo is a new program, and you may remember them from the Hot Pepper Pitch at SXSWi. They narrowed the applicants down to these eight brands through an intense process:

Seed Sumo reviewed 1,227 applications and conducted a series of reviews to get down to its eight startups. The first 700 teams were cut based on lack of team, traction or tired concepts (i.e. workout apps or Uber for anything). Seed Sumo then evaluated a little over 500 teams using a recruiting star system to rank startups by team, market size, traction and idea – similar to what is used in college football. After narrowing this list to 100, Seed Sumo used a Class C Psychometric – a behavior profiling technique used by some of the biggest teams in professional sports. A narrowed down list of 40 were then given “challenges” to see which teams could execute (i.e. A/B tests, conversion goals, pricing tests).  This was followed by video interviews and email Q&As. This brought the list to 16, and the final eight teams were selected as they offered the greatest benefit to Seed Sumo’s network and resources.

Based on this review process, the following eight startups were accepted:

Seed Sumo’s original class started with $20k each and has gone on to raise almost $4.5MM since graduating.  Some of the companies making headlines nationally are (AskU, Unseen, Gazoo, Fanout, and Sportwip).

Seed Sumo has grown at a rapid pace

New to this year’s Seed Sumo program is additional staffing, which includes nine staff members, two “hackers” to help with all things internet/programming, dedicated mentors that have specific interest in the budding company, a twist on demo day, and more than 4,000 expert advisors are available to the accelerated companies.

The new offerings will complement the perks offered to last year’s participants, which included a dedicated space to work, countless indoor/outdoor meet-up zones scattered throughout campus with multimedia and enough whiteboard to solve the world’s most challenging problems. Not to mention a state of the art R&D lab for scientific pursuits, a full length football field and a complimentary massage once a month in the “chill room” located on campus.

Perks aside, Seed Sumo is bringing a new energy to Bryan, Texas and to the startup world. Keep your eye on the eight companies in their second accelerator class.

Tips for taking more control of your time