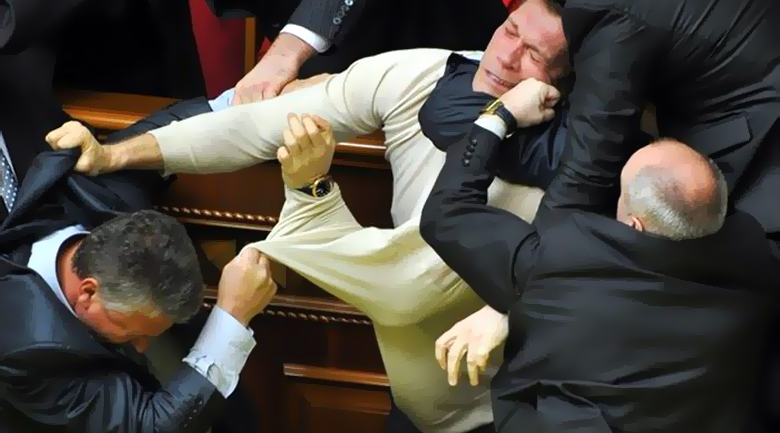 Above: in a 2010 Ukranian court, a physical brawl broke out including punches, egg throwing, and smoke pellets.

Above: in a 2010 Ukranian court, a physical brawl broke out including punches, egg throwing, and smoke pellets.

As the “fiscal cliff” continues to dominate headlines, each side of the aisle is heated and while no one expects eggs to be thrown during negotiations, both sides and their advocates are heated. President Obama is standing firm, asserting that he is “open to compromise,” but won’t back down on tax hikes on the wealthy, and White House Press Secretary Jay Carney has stated that the President is sticking to his original budget plan, which includes $1.6 trillion in new revenue, by raising taxes on households making more than $250,000.

The small business community worries that these tax increases will have an impact on their business, but President Obama has stated that 97 percent of small businesses will be untouched, as “most” small businesses fall under the $250,000 threshold, which new studies and task forces have disproved.

According to the U.S. Treasury Department, there are 34.8 million small businesses in America, 30 million of those employing no workers (like consultants, eBay retailers, etc.), so with Obama’s plan to increase income taxes, increase capital gains taxes, phase out exemptions and deductions on upper brackets, not to mention health reform costs.

According to the Joint Committee on Taxation, 940,000 small businesses are subject to tax hikes effective January 1st, and 1,000,000 small businesses when health reform taxes are added in. The Committee reports that $600 billion would go toward taxes instead of job creation, which many believe would stunt any chances of an economic recovery.

Sen. Mitch McConnell, R-Ky., said the party is “ready to find common ground,” but “we’re also not about to further weaken the economy by raising tax rates and hurting jobs.”

Meanwhile, a new Enrst & Young report indicates that the tax hikes would wipe out over 710,000 jobs, increase unemployment by 0.5 percent. Additionally, they report that the real after-tax wages would fall by 1.8 percent and workers’ living standards would decline.

The report notes that the U.S. GDP would fall by 1.3 percent, a full $200 billion. “Higher marginal tax rates will result in a smaller U.S. economy, less investment, and lower wages,” the independent auditing firm asserts.

The nation awaits the negotiation process, particularly small businesses who await news as to where they fall, as taxes may or may not go up as of January 1st, 2013.

In this article:small business, tax increases