Uh oh, Snap is losing a bunch of money. Like, a lot a lot. Pro tip for those who also weren’t paying attention: Snap is the company that owns Snapchat. Despite being a compulsive user, I only just learned this. I feel like someone I’ve known as Robert their whole life is now insisting on going by Rob and it just isn’t sticking.

Unfortunately, I’m kind of worried about them now. Snap’s recently released S-1 has many drawing comparisons to Twitter, but not in a nice way. Like Twitter, Snap is losing leverage and its growth rate is slowing. Chart lover Ben Thompson at Stratechery throws down some comparisons of Snapchat to Facebook and Twitter at the time of their IPOs.

Thompson looks at Daily Active Users in relation to the cost and revenue of each user at the time of each company’s IPO. Unsurprisingly, Facebook, Twitter, and Snapchat’s daily active users have all steadily grown since their onset. 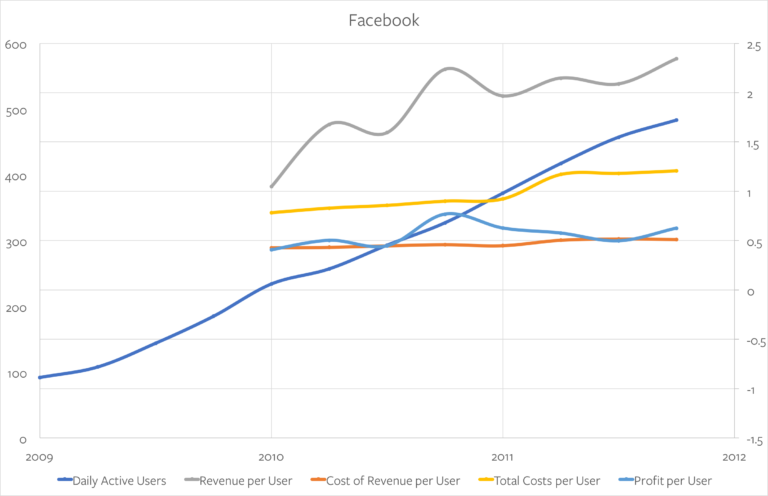 At the time of their IPO, Facebook was winning at the not losing money game. Though the company wasn’t gaining much leverage, it wasn’t losing it either. While Facebook’s total cost per user has increased since their IPO, average revenue per user has has also gone up.

According to the graph, Facebook had to spend a bit more per user, but its profits would continue to grow so long as either average revenue per user or total users increased overall. Lucky for Facebook, both of those things happened. 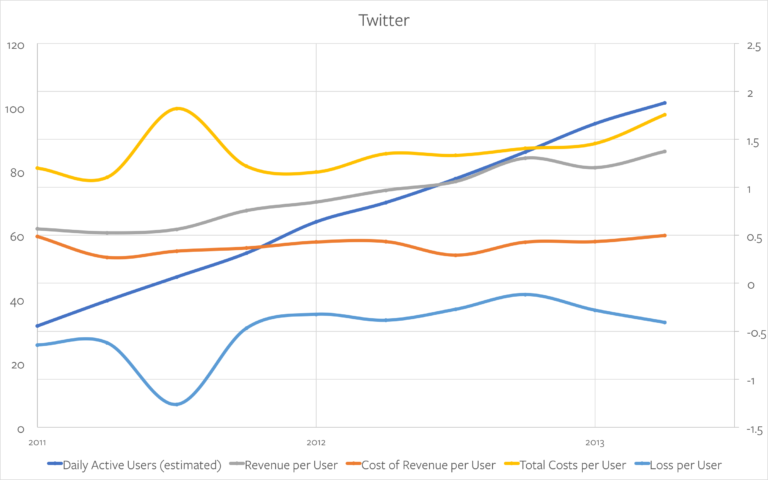 Twitter also had a flat cost of revenue at the time of its IPO, but its total costs were higher than Facebook. However, Twitter wasn’t able to grow revenue per user or increase the total number of users in a meaningful way.

User growth slowed and costs never flattened. Thompson notes, “had the company simply kept its pre-IPO cost structure it would be in far better shape today.” At the time of their IPO, Twitter and Snap are losing money on users. 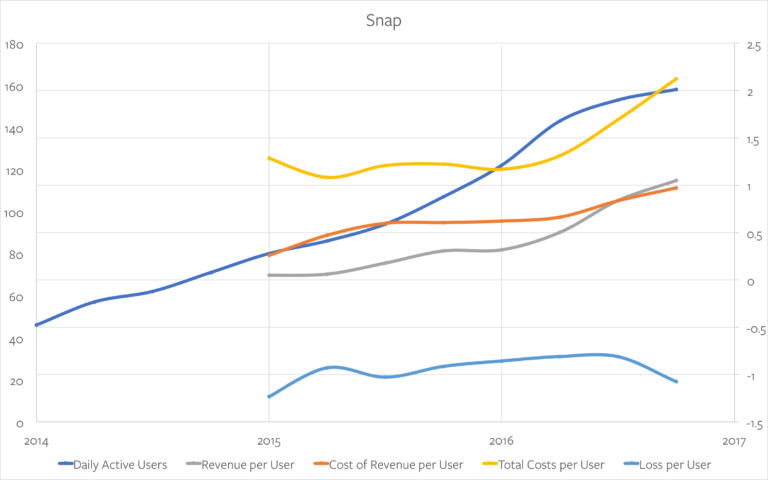 For Snapchat, costs per user have surpassed revenue per user. Snapchat now pays more per user than Facebook or Twitter at the time of their IPOs. Snap needs to grow users faster than costs or figure out how to grow revenue per users.

Snap’s S-1 states their strategy is investing in product innovation through their camera platform.

Snap points out that as their user base grows, they will incur additional costs.The more people join, the more content is consumed and shared.

Snapchat isn’t fun if there’s no one to send snaps to, so user growth is exponential as new adopters and veteran users convince friends to download the app.

This means additional employees are required, as well as increasing computing infrastructure and development costs.

Snap is confident that its concentration in the US and access to high quality ad units make it desirable for advertisers. If Snap captures the best customers by delivering innovative products, even if those innovations are costly, they will profit. That’s banking pretty hard on the idea that TV advertising money can successfully tap into mobile, but we’ll see.

Thompson points out that Snap’s focus on innovation is essentially Apple’s go-to strategy. However, Thompson says the problem with this approach is that it didn’t work out for Apple initially. When Apple first took to the market with Mac computers, they didn’t stand a chance against Windows. Microsoft had leverage by playing on already established standards in computing, creating backwards compatible software and tapping into IBM as a sugar daddy.

Likewise, Facebook currently holds queen bee status over Snapchat for the simple fact of its market saturation. While both companies managed to digitize offline relationships, Facebook has a tighter stranglehold on marketing.

However, Snap’s camera company might be what can put them ahead.Snap said they envision the camera screen as a “starting point for most products on smartphones.” In fact, Apple introduced a quick swipe feature allowing users to access their cameras without having to unlock or open up the camera app.

Like Apple, Snap thinks beyond form and function, instead focusing on delivering what the user doesn’t even know they want.

Five years ago I had no idea that my favorite app would be something lets me send out disappearing messages, but here I am preaching to anyone who will listen about the glory of Snapchat.

And bless Snap, because they really do care about all of us selfie addicted kids out there. Their S-1 states, “We believe it’s always worth trying to build something that will empower people to express themselves, live in the moment, learn about the world, and have fun together — even when it’s not clear that what we build will be successful or make money.”

This is why I love Snapchat.

Even though there are bumps in the road–some of those sponsored filters are really obnoxious–at its core, Snapchat believes in communication innovation.

They know they’re working with something revolutionary and are willing to take risks to continue serving their loyal consumers. I’m rooting for Snapchat, and apparently so are investors. They’re valued at $18.5 BILLION dollars, so let’s all cross our fingers and hope for the best.

A special thanks to Ben Thompson for keen analysis and wicked awesome chart skills.

In this article:snap, snapchat, Social Media, The News