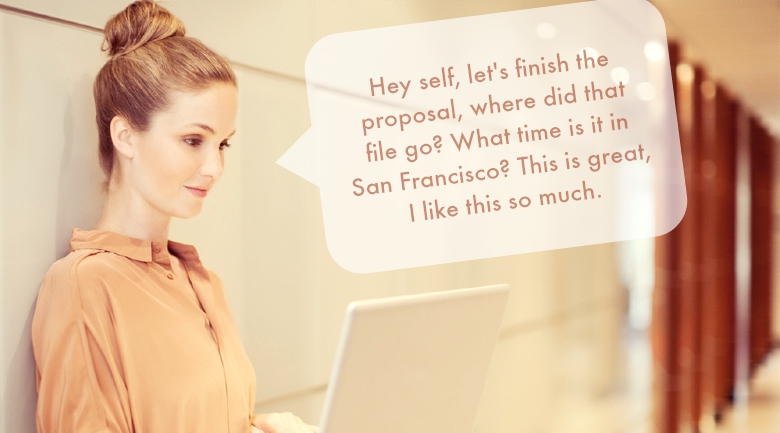 Admit it: you talk to yourself on a daily basis. Relax – you (probably) don’t have dissociative identity disorder. Between sitting in the car during the daily commute, hours spent alone at home, and a general lack of human interaction while working, it’s hard not to let a comment slip now and then.

Read also: Which productivity tools are actually being used by leading entrepreneuers today

Intriguingly, however, a study was recently done that shows a positive correlation between talking to oneself and increased productivity (don’t just take my word for it – you can read the full study for yourself).

When searching for an object, participants in studies who have said the name of the object out loud have consistently had a larger success rate (or at least a faster “find” time) than those who refrained from speaking. Likewise, you’ll find that talking yourself through a task whilst attempting it will yield better concentration—and, often, better results.

Even the most menial tasks (i.e., mowing the lawn or washing the dishes) have been consistently proven to benefit from a little self-talk.

Encourage yourself and your team to think out loud

Rather than frowning upon this behavior, which—though potentially unnerving, at times—has been clearly proven to aid in workflow and productivity, perhaps this should be actively encouraged as a workplace technique. Consider an analogy between one’s business and a machine: if all the parts are working at their optimal capacity, then the machine will function at its optimal capacity. If, however, the parts are working above optimal levels, the machine will be more productive. The same concept applies to businesses and workplaces of any size; why not give your staff absolutely every edge you can afford?

If you are one of the three people in the world that don’t talk to themselves while working, now would be a good time to introduce the habit. In addition to the obvious benefits to productivity, self-talk has been proven to be a largely effective way to deal with stress. After all, who knows you better than you?

In this article:productivity, talking to yourself