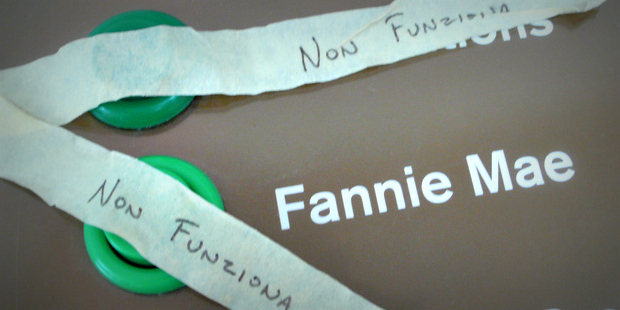 According to a report released this week by the Federal Housing Finance Agency (FHFA) inspector general, Freddie Mac and Fannie Mae knew as far back as 2003 that various law firms the agencies had hired to foreclose on homes were abusing their authority and pushing through false foreclosure filings as part of a broader robo-signature scandal. Allegedly, because the mega-firm got paid based on the number of foreclosures completed, not the number filed, there was clear incentive to file as many as possible, according to the report. The inspector general says his own agency is partially responsible, as they notified the agencies of the violations years ago but failed to follow up or oversee the situation in any way, leaving the law firms to police themselves (which the report alleges they did not do).

Now, the Palm Beach Post is reporting that Freddie Mac fired the law firm for their abuses, and communicated as much with Fannie Mae leaders, but Fannie Mae claims it is too expensive to transfer files to new attorneys, as the Law Offices of David J. Stern is expected to submit a $5.5 million bill to the agency for transferring the files to new attorneys, so although they were fired by both agencies, Fannie Mae has decided to keep the firm on as a means of saving money.

The report notes that this is not the first time that attorneys have been retained by Fannie Mae despite abuses and under-performance that led to Freddie Mac firing the same firms from their network. The report points out that this fact alone shows the lack of communication between agencies and the poor structure of oversight.

“It’s just another layer of outrageous information,” foreclosure defense attorney Evan Rosen told the Post. “Fannie and Freddie were designed to help stabilize the nation’s mortgage markets, but they diverted their focus on crisis control and how to push through foreclosures and do it in a way that would shed as little light on the process as possible.”