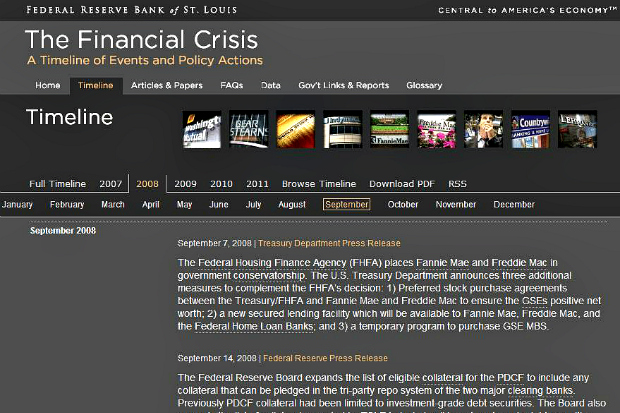 Although some are pointing to tiny signs that the economy may be done bouncing at the bottom and ready for its slow march toward health, others are saying we’re years away from a recovery. No matter where you fall on the spectrum, it is critical to understand the history of our recent economic crisis because you all know what they say about hindsight…

The St. Louis Federal Reserve Bank has designed and released an interactive timeline about the financial crisis which dates from 2007 to today and makes clear what speed bumps our economy has hit along the way, as depicted in the image above.

St. Louis Fed President, James Bullard said, “The Federal Reserve and other agencies have taken many steps to contain the ongoing financial crisis and limit its impact on the broader economy. It is critically important that we clearly communicate our actions to better ensure their success. This web site was created to provide the public with useful information about major financial events and policy actions, both over the past months and going forward.”

It is interesting to match up the timeline with when you most felt the economy come to a screeching halt. For some people on the west coast, it was in 2007, for much of the South it was late 2008. What month and year were you most impacted and felt that the economy was crashing down around you, or did you remain untouched and unharmed in your business?