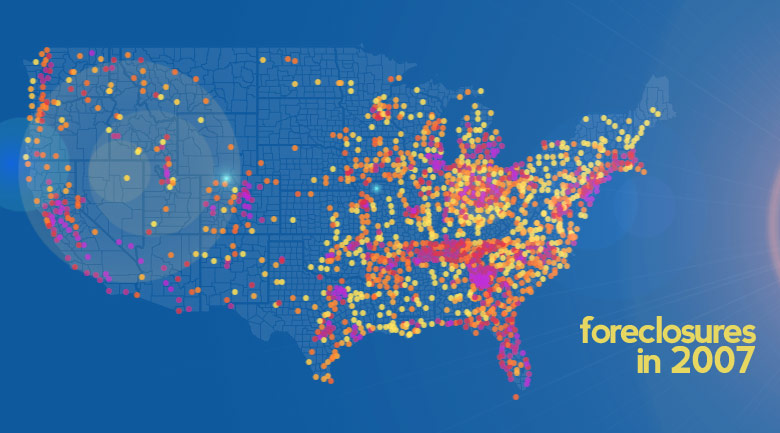 As the housing economy continues to struggle, there are small signs of health emerging, which CoreLogic’s Chief Economist, Mark Fleming aptly called housing “finding its footing,” in a report released today indicating that foreclosures have slowed for the fourth consecutive month, yet remain below the pre-recession “normal.”

Some economists continue to warn of a looming shadow inventory which CoreLogic says is actually clearing up. The one thing that is not debatable is that roughly 3.8 million homes have been foreclosed upon since the September 2008 bust, which is not exactly an easy number for anyone to swallow.

In an interactive map The Atlantic is calling “stunning,” the WNYC radio station pulled together years of Realtytrac data in an interactive visual to show the widespread foreclosure epidemic.

Below is the final result of their work, with foreclosure data by county exploding in color indicating the rising rates of foreclosure in each area. The darker the colored dot is, the higher the rate of foreclosure, as indicated in the key.

Tip: click “fullscreen” on the bottom of the map to see the entire nation, and push “play map” to see animation of how foreclosures spread over the years.

The Atlantic writes, “you can see how many more dots show up on the map, indicating a higher prevalence of foreclosures. But perhaps more disturbing, the map displaying the most recent data in July 2012 doesn’t look much better than past maps: The crowded dots maintain the visual effect of a foreclosure epidemic.”

The road to a housing recovery is a long one, and while the sector may be finding its footing, inventory and lending remain tight, prices are improving, there are signs of hope, but many wonder what housing will look like after the elections and after the world has stopped holding their breath.