According to the Freddie Mac Primary Mortgage Market Survey® (PMMS®) released today, Freddie Mac reports that fixed mortgage rates moved slightly higher for the week to an average of 3.40 percent, after gaining slight ground the week prior, having dropped to 3.39 percent. Last week, the government-sponsored enterprise pointed to a growing economy and low inflation, but this week points out employment data, all of which play a part in the moving puzzle pieces of the economy.

Last year at this time, the 30-year fixed-rate mortgage averaged 3.99 percent, dropping below 4.00 percent for the first time since Freddie Mac started reporting its weekly mortgage rates survey in 1971.

Dr. Frank Nothaft, Vice President and Chief Economist at Freddie Mac said in a statement, “Mortgage rates remained near record lows following the employment report for October. The economy added 171,000 jobs, above the market consensus forecast, and the two prior months were revised up a combined 84,000. The Labor Department also reported that the unemployment rate ticked up to 7.9 percent and that average hourly wages were unchanged.”

As always, the national data depicted above is not always reflected in regional data, as a 30-year FRM in the West cost lest this week than in the Southeast, while a 15-year FRM costs the same in the Southeast and Southwest, both of which are higher than the North Central and Western regions. 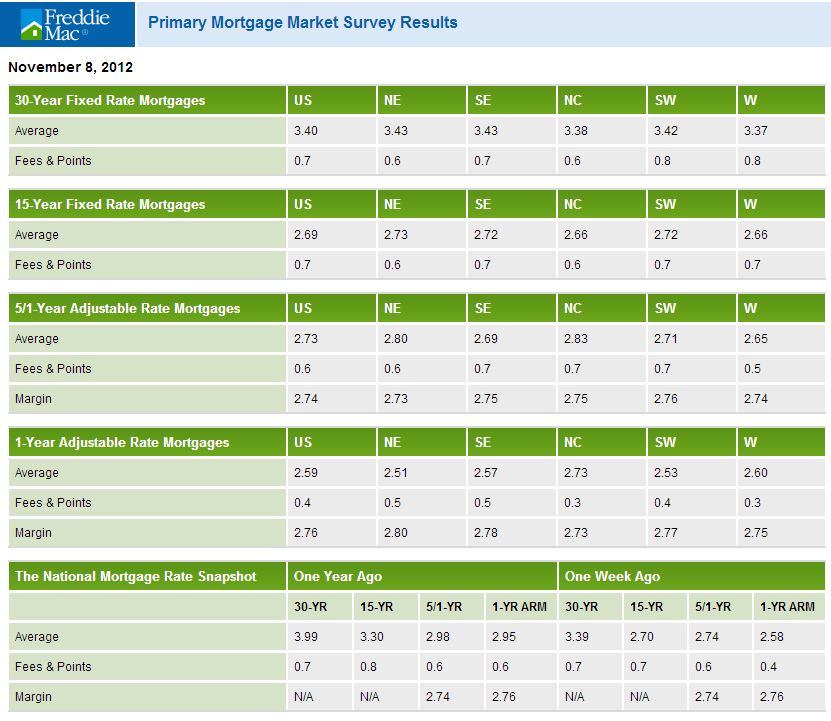