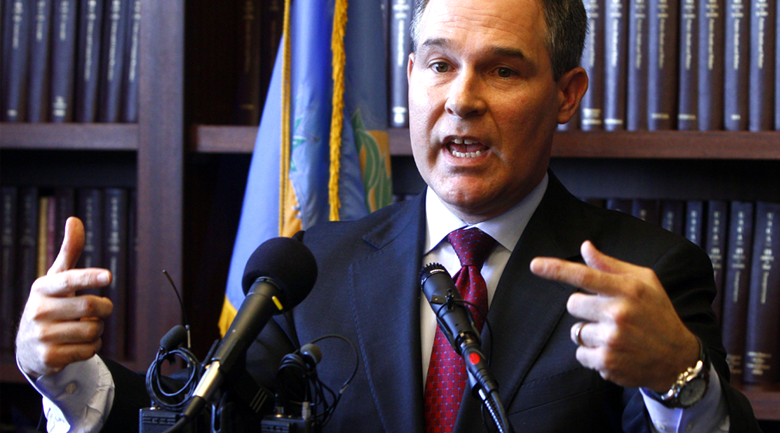 Oklahoma doesn’t get a piece of the $25 billion pie

What stood out to us at AGBeat all along that most ignored is that one state was a holdout, and left negotiation talks with the big banks completely. Oklahoma Attorney General Scott Pruit said back in 2011 in a letter from his state, Nebraska, and Alabama, that the probe leading up to the mortgage settlement would “override state laws” and that forcing banks to reduce loan balances on mortgages to help struggling homeowners “goes too far” in many cases.

The letter stated, “We have concerns … that what started out as an effort to correct specific practices harmful to consumers has morphed into an attempt to establish an overarching regulatory scheme that fundamentally restructures the mortgage loan industry.”

But now, Oklahoma is getting paid – how?

While homeowners in other states wait to see their small portion of the settlement, Oklahoma announced this week that they have issued the first mortgage compensation checks in America to borrowers who were victims of unfair and deceptive practices by Bank of America, Citigroup, JP Morgan Chase, GMAC and Wells Fargo.

So how did Oklahoma leave the negotiation table yet become the first to issue checks? Pruitt said long ago that he would fight for local homeowners, and that the $25 billion settlement was not good enough for victims in his state, so his office negotiated its own agreement directly with the big five banks, providing what they say is up to 20 times more than the payments residents in other states are expected to receive.

The AG’s office said in a statement that over 700 residents applied for relief from the Oklahoma Mortgage Settlement Fund, with an average payment so far of $11,000. Checks have been mailed to over 100 residents, and checks will be mailed each week through the end of January. Families that qualify under one of two main categories receive a minimum of $5,000, with some families seeing as much as $20,000.

“These families endured horrendous conduct, lost their homes in many cases and deserve more than an ‘I’m sorry’ and a few hundred dollars,” Pruitt said. “It is very exciting to be able to provide these Oklahoma families some meaningful relief for the harm caused, and a chance at a fresh start.”

Pruitt’s office says the latest estimates show residents in other states could receive as little as $840 from the federal fund. Many of the 49 states that participated in the federal settlement are using the money they receive under the federal settlement to fund various areas unrelated to housing. The areas include the state’s general fund, higher education, marketing and additional staff for AG’s offices. Oklahoma is the only state to have cut checks to residents thus far.