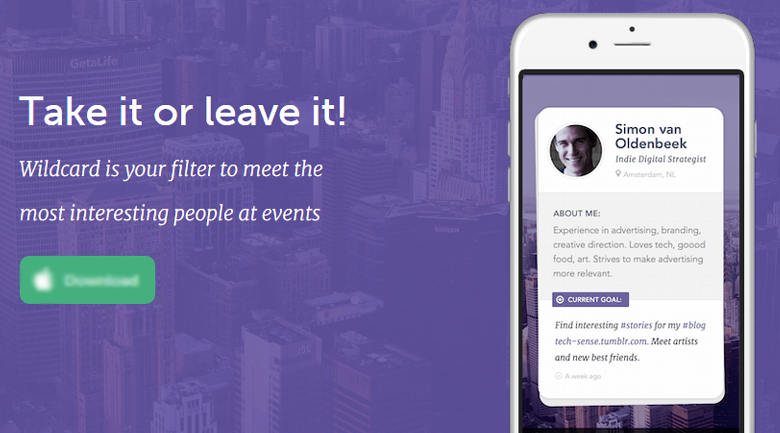 Wildcard is our favorite app, but we can’t use it

Networking events and big conferences can be a challenge, no matter how outgoing you are. Connecting with the right people can be done by researching attendees in advance, but pinpointing those people in a crowd can be tough, and not all events offer attendee information.

So Wildcard has barely launched in beta to immediately solve this pain point. It’s kind of like Tinder but for professional networking, minus the creepiness. You load up your profile with a profile pic, brief bio, and current goal, and you begin swiping through other users’ profiles.

When you see someone that you’d like to network with, you click the “Take this Wildcard!” button, and if that person is interested in networking with you, a match is made.

Read also: How to quickly know if an app is going to invade your privacy

It’s the perfect app – it’s simple, user friendly, beautiful, and will even soon be available on Android. Networking events are about to get a lot better.

The only problem is that users won’t use it

Why? We host a series of very popular events – a seven-year-old monthly networking event and a quarterly jobs mixer. We have hundreds of potential users primed for using the app, but we won’t be signing up.

You see, once a match is made through the app, both users get each others’ cell phone numbers so texting may commence and they can meet up. The only problem is that when I reached out directly to 40 of our regular event attendees, as a sample group, something interesting happened – I asked, “what do you think of using this app at our event?” Simple question.

Almost unanimously, the 21 men were completely on board and enthusiastic about the app, with one noting that ladies might not like it, and 18 of the 19 women said they wouldn’t use it, and when pressed, I learned that they would only offer their phone number to someone after meeting them in person and vetting them. So I asked what about a Google Voice number or work number, and all still said no. One male said the same, because he’s too high profile to just give out his number which he guards.

We asked the company for options, but…

We reached out to the founders, asking if there was an in-app messaging possibility in the future, and they said no.

The company told us, “Exchanging phone numbers is part of our concept. It’s putting something on the line, it immediately connects people. We think messaging creates a distance and we don’t want that. We like to focus on quality of quantity. Next to that, if you share a business card you basically exchange numbers too. We’ve tested this with about 200 people and they loved it.”

When pressed, asking if they are sure there’s no future for in-app messaging, they confirmed that they will not be considering it.

Although we love the app and it is our new favorite concept, requiring phone numbers makes it unappealing to our attendees. Perhaps it’s because many are tech leaders, CEOs, politicians, lawyers, but even fashion bloggers, developers, and copywriters had objections. What a shame. We’re now left looking for an alternative, even a knock-off that doesn’t require phone numbers.

@laniar @AGBeat thanks for the feature and story. One thing, we are considering to not use phone numbers, but not for short term 🙂

We are so excited to hear that Wildcard will be considering it in the future, and they are still in very early development. The company had told us previously in email that it is something they will “keep in mind,” and that they are only in the MVP stage, so it was (and is) my opinion that they appear unwilling to change their strategy (which is their right). For now, we simply hold our breath and wait for the day in-app messaging becomes available!

In this article:privacy, Tech, wildcard