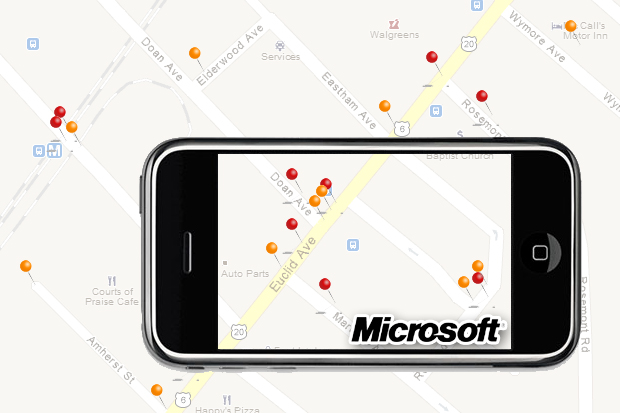 Pedestrian Route Production is the description of the patent Microsoft has recently registered with the U.S. Patent Office for their mobile GPS application, and it sounds relatively inoffensive. Not for some. Beginning with a not-so-clever CBS Seattle station, it has been re-coined the “Avoid the Ghetto” app.

The app will be installed on Windows mobile devices and when it becomes available, it has been designed to help people not traveling by a conventional vehicle; as the name suggests, it is designedfor someone who walks, uses a motorized chair, or goes by bicycle, and who may want to take certain routes when moving throughout an area.  From Microsoft’s Patent application, loosely translated, this can mean taking a scenic route versus the shortest route possible, to see sites in an area like historical landmarks, or just to get to a place the most quickly.

It can mean taking weather and terrain into account, such as sidewalks vs. no sidewalks. It can be checking to see if there are specific businesses along a route, such as banks, restaurants, or shopping venues. There will be a feature for anyone with sight impairment, or those who may require audio assistance in their travels. Another function will be able to direct users to public transportation, and yes, it can mean avoiding areas that are “unsafe” or which have “high crime rates.”  The patent application does not indicate what technologies or sources would be used to determine either crime rates, or a “neighborhood.”

Where the controversy stems from

In the words of Cleveland City Councilman, Zach Reed, the controversy stems from the subjective nature of evolving data. “How is someone in Silicon Valley going to tell you to how to avoid someplace on Kinsman (both a Road and neighborhood in Cleveland)? Or in New York City? Or in Washington D.C.?  The data will be old, outdated, it can be manipulated. The app is bad, useless, because the stats aren’t real-time. People will avoid (his) neighborhood, they won’t do business there. And of course, neighborhoods can change.”

These are just a few of the comments from two separate interviews, WOIO Chanel 19, and a longer one, available via podcast with WTAM’s Bob Frantz.

Reed, along with the CBS Seattle, ignorantly chose (and this degrading word has unfortunately hung on) the term “ghetto” as well as those others who are blasting the app itself as “racist.” They are wrong.

From my point of view as a Realtor, this is absolutely nothing new. We’ve always directed clients to third parties if they asked about crime stats, how schools are ranked, places of worship, amenities and points of interest – which is exactly what this app does, for goodness sakes. By having crime stats available via a mobile device, it’s doubtful people will simply decide to stop going to entire towns, or even sections of town en mass.

If someone chooses, however, to avoid a known drug corner, or a take a different block if one has a lot of gun violence, that may be… logical. A person not in a traditional vehicle is instantly more vulnerable to becoming a victim, and has every right to know where a high percentage of violent crimes occur before traveling any place.

The Microsoft app is not racist, the term “avoid the ghetto” was given to it by an editorialist and has caused an uproar, but while the app is legitimately useful and logical, the label it has been given is not.

In this article:Real Estate, Technology