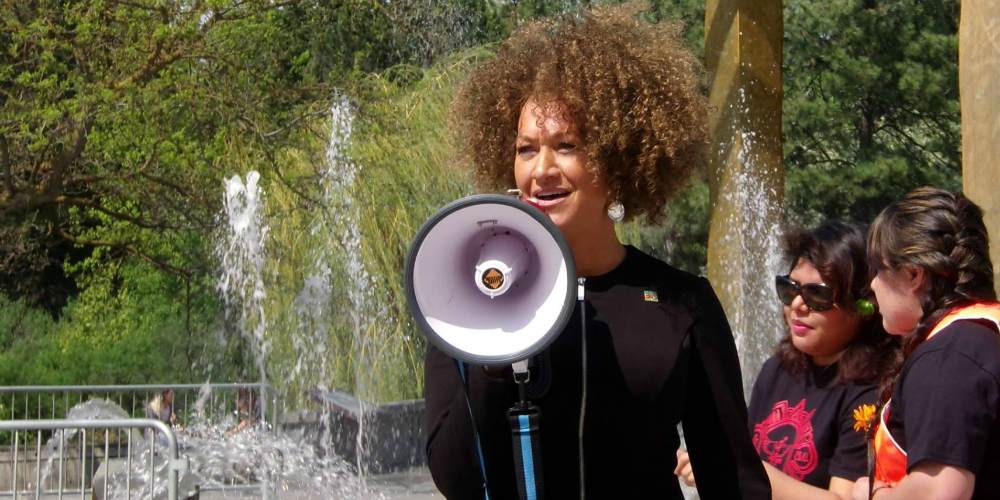 Rachel Dolezal is back in the news again, now claiming she faces more discrimination than transgender people. You may remember Dolezal from a 2015 scandal with the NAACP that stirred up controversy about identity.

For about a year, Dolezal served as president of Spokane, Washington’s NAACP chapter. Then it was brought to everyone’s attention that Dolezal was actually white, but had been claiming to be black.

Amidst the controversy, Dolezal stepped down from her position.

Although racial identity does not factor into qualifying for NAACP leadership, this was not the issue.

Dolezal didn’t claim a black identity to qualify for a position. She identifies as transracial, saying she is “trans-black.”

As a white person, it’s not my place to decide who gets to identify as black.

I’m not here to question her identity. However, as a genderqueer individual, I’m here to critique her statement that as a transracial woman, she faces more stigma than transgender people.

In an interview with Salon, Dolezal notes that Caitlyn Jenner’s story came out almost simultaneously with her own exposition. Let’s take a moment to remember that Caitlyn Jenner’s public announcement of her transition was some people’s first introduction to the concept of transgender identity.

Dolezal says that although there are similarities between her story and Jenner’s, “what’s not similar is the stigma.”

She goes on to say, “There was stigma in the past for sure, and that still perpetuates to a degree, but there’s more acceptance for gender fluidity than there is [for] race fluidity right now and I don’t think anyone would deny that.” Except oops, here I am ready to deny that. Let’s unpack her statement.

The idea that stigma is a thing of the past is completely incorrect.

Workplace discrimination is just one facet in which stigma show up disproportionately for trans individuals.

Although many employers are making efforts to be more inclusive, 77 percent of respondents in the 2015 U.S. Transgender Survey say they have hidden their gender in order to avoid discrimination. Hiding gender includes anything from not disclosing one’s assigned gender to straight up quitting a job to avoid harassment. Why hide? 23 percent of respondents reported facing some form of mistreatment in their job due to their gender expression and identity.

This is stigma perpetuated to more than just “a degree.”

Transgender and gender nonconforming individuals have an unemployment rate triple the national average in the United States.

While Dolezal has experienced many parallels with trans individuals, her struggle is not greater. When her true identity was exposed to the public, she faced so much stigma she resigned. She received threats, hate mail, and has had trouble securing a job since the incident. This happens all the time to trans individuals.

Those who are forcibly outed, with their trans identity disclosed without permission, are subject to humiliation and violence.

Trans people who are open about their identity are also far likelier to experience violence, discrimination, and mistreatment.

The lack of understanding around transgender issues means trans individuals are often denied equal treatment because of their identity.

Every time I apply for a job, I have to decide how important my gender is to me. Am I going to bring it up or wait for a situation to arise and then address it? Do I even bring it up at all?

I worry my identity will jeopardize employment opportunities.

So I usually become an invisible statistic and answer to incorrect pronouns because that’s easier than confusing or offending my coworkers. But when employers provide gender neutral bathrooms, I feel like a real person. When applications ask what pronouns they should use to address me, I feel hopeful.

It means someone out there is paying attention and opening up opportunities for diversity and inclusivity.

I know many employers are working to be more inclusive to all employees and applicants. This is partly out of practicality. It’s important to understand all the parts of a diverse workforce in order to function. However, we have a long way to go.

Claiming that stigma is in the past is akin to arguing women’s rights are solved because we have women in the workplace.

Stigma is alive and present every day for trans people. Trans rights are multifaceted, but that doesn’t mean we get to write them off as unknowable, unsolvable. Although visibility is increasing, conversations about transgender rights are far from over.

While I completely disagree that her struggle is greater than that of transgender people, it’s still a struggle.

We don’t have to agree with or entirely understand someone to recognize that they are suffering from culturally imposed limitations. To make any progress, we need to listen to the needs of others. This sounds simple, but it’s not.

Making progress in the workplace means accommodating people without alienating others.

It’s a process. Employers should be willing to do research on their own end in addition to listening to their employees about issues without pigeonholing anyone into a binary choice that may not exist for them.

In this article:dolezal, The News, trans