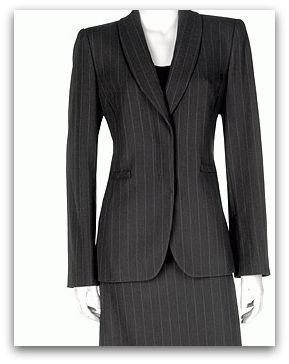 This time of year NAR advertises and promotes the idea of using a Realtor.  It is working because some days I do feel used.  The local real estate companies also have advertisements on TV and on billboards around town,  promoting the idea of using their Realtors.

I do own suits and I wear them when I need to dress up.  I have been know to run home and change into a suit before presenting an offer.  I don’t need to wear a suit to show houses and often it is best that I don’t.   Sometimes I have to climb ladders or go down into dank dirty basements.  Other times I have to walk muddy lots , or construction sites where hard hats are required.  Wearing the wrong shoes or cloths can greatly limit my ability to do a good job.

Yesterday I trudged through knee deep snow.  I can’t imagine what it would have been like if I had been wearing a skirted suit and some high heeled pumps like the women in the ads. As it was I fell into a snowbank as I was leaving the home. Had I been wearing cloths like the women in the ads wear it would have most likely ended my day.  I was able to continue on to my next appointment with out missing a beat.  Would my client have taken me seriously if I had shown up all dressed up to go out into the woods in the snow to look at a vacant home?

I can’t think of any time any of my clients have ever been dressed up when we go out looking at homes.  I encourage them to dress comfortably and to wear shoes that can easily be taken off and put back on.  People like to dress comfortably and my clients just don’t look like the people in the pictures I see in the ads.   Most employers in my home town have adopted a more business casual type of dress code.  The attorneys and bankers dress up but the engineers and software developers do not.  The doctors and nurses from the local hospital do not wear formal business attire either. I don’t think I would ever show homes while wearing a suit jacket, skirt and high heels.

When I look at the images in the advertising they look wooden and stuffy, as does my own photo in the recent Realtor Magazine article.  I know the pictures I see are just advertising, and that women are not portrayed well in any kind of advertising,  but I think it would be great if Realtors were portrayed as real people who look just like everyone else. I would rather dress more like the people that I have contact with, and dress for success so that I can make it up and down the steep latter or across the muddy lot.

I can’t identify with the skirted suit wearing realtor in the ads.  She doesn’t represent me and I almost resent seeing her picture all over the place.  It isn’t the image I want buyers and sellers to have in their heads of what a good agent looks like.  Realtors are not all formal and stuffy, some are more like the rest of the population, informal, friendly and real.