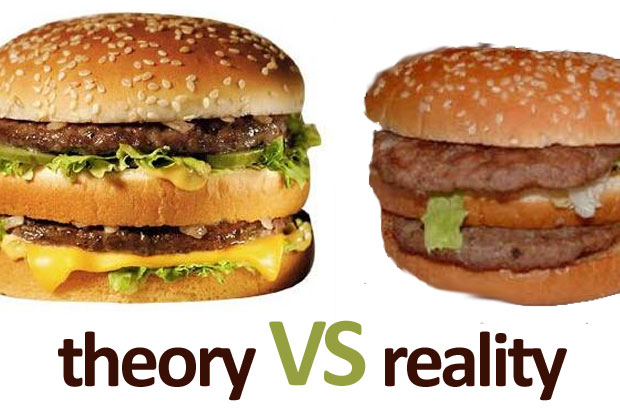 Here we are again, nearly finished with the first week of December, the new year already taunting us to plan for its arrival. Those who’ve been their own boss for long enough realize how iffy planning and making goals is, especially when the Firestones hit the pavement. Personally, the fastest I’ve been snapped out of FantasyLand was Valentine’s Day. How’s that for delusional planning? Never thought I’d be sayin’ this, but the advent of technology has made things worse in some ways when it comes to our yearly goals/plans.

Theory should be treated as a drug

Sure the TechnoGeeks have made much of what we do much easier — no argument there. They’ve also brought their brilliance to the marketing/prospecting arena, sometimes with very nice results. But technology, unlike the human using it, doesn’t think. If that were the case every real estate agent with a cheap website and an IDX would be takin’ home six figures like clockwork. Last time I checked, most agents barely cover the cost of the site and the IDX, much less make a great living from it.

Surely I’m the 10 millionth guy to say this, but technology itself isn’t the answer for anyone other than the inventor, and then only if it sells well. It’s always been about belly to belly, and it will always be about that interaction. Technology is like a drug in the same way so many illegal drugs make us feel good for awhile. However, while under it’s influence, we can’t do much of value.

Due to the nature of my business, geographically speaking, I’ve met countless agents and loan officers who can’t spell high tech, yet run circles around those who’ve master it. What many of the worshipers of high tech haven’t grasped yet, is that they can’t spend theoretical results. A solid example is the agent generating 40-50,000 leads annually whose ‘team’ can’t close a transaction a week. How discouraging is that?! But we’ve all been there in one way or another. Speaking from experience, I’ve wondered a few times if I could even spell real estate after a particularly unsatisfying year.

We don’t deposit leads in the bank. Yet that very simple truism is lost on most. Same with website/blog traffic, Craig’s List leads, and every other marketing and/or prospecting strategy we use.

We’ve all been admonished to learn from failure — few of us take that bull by the horns and make it happen. I challenge you to make things better for yourself this coming year, by eschewing all things theoretical in nature. When it comes to the real estate brokerage biz, Barnum and Bailey were spot on. Though sometimes I think it’s more than one a minute, as I’ve been the sucker far too many times myself — and paid the price.

I realize I pound the concept of producing results like a carpenter with an attitude, a new hammer, and too many 16 penny nails. But if you’ve figured out how to spend theory, I’m all ears. Don’t get me wrong, I’ve made big time money using unproven theoretical strategies, both high tech and OldSchool. But my entire year’s production didn’t hinge on ’em workin’.

And the congregation said Duh!

It’s been my painful experience, though warned a bajillion times, that me being busy doesn’t automatically translate into my banker being happy to see me comin’. It’s human nature to fool ourselves into equating a so-called busy ‘schedule’ with hefty paydays. Yet sadly, the vast majority of the industry proudly complains about how they barely have time to spend 10 minutes eatin’ lunch. Meanwhile, their desk is manned by another ‘busy’ agent a year later.

I realize the coaches out there think the following is heretical, but from my heart to yours, how we set our goals, or how we plan to get there, isn’t the core issue. It’s about our ability to quit lyin’ to ourselves when it comes to separating theory from what we know is reality.

Reality is measured in production. I know a few agents who would run over their mamas if it meant generating 250 leads — yearly. Yet they’re makin’ $10-50,000 — wait for it — a month. They’re immersed in the reality of what works in real life. They don’t treat their livelihood like the latest X-Box game.

They don’t play make-believe with their daily bread.

It’s not easy when we remove the shiny objects, the ones based on theory, from our goals and plans. The only thing worse than having theory-based goals is tryin’ to reach them employing theoretical strategies.

It’s about gettin’ in front of folks, belly to belly. Those folks might not choose to do business with ya. We all have our own batting averages. But the .200 hitter who closed 50 transactions in 2011 made tons more income than his competition who closed half as much, but with 10 times the activity/leads/high tech.  I’m reminded of what Grandma told me as a young man just weeks before I got married.

She said, “Jeffrey Scott, there are only two people who must always be happy to see you coming. Your banker and your wife. Do that, and the rest will take care of itself.”

And I’m here to tell ya, that ain’t theory.

In this article:real estate professional