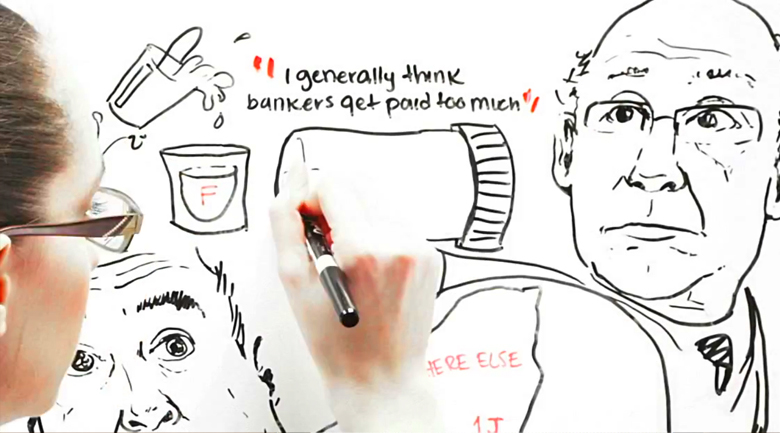 As the American economic crash is blamed on Wall Street and it has become popular to bash the one percent, many speculate that cutting the massive annual bonuses or altering the pay structure of the fat cats on Wall Street would go a long way toward fixing the economy, but One Minute MBA offers an alternative view.

Some of the points may be debatable, but analyzing Wall Street bonuses from a bird’s eye view has some, including One Minute MBA considering whether or not slashing bonuses has any benefit outside of catharsis.

Now is the time of year when Wall Street banks pay their employees and executives their annual year-end bonuses and the rest of America freaks out about how outrageously big they are.

I’ve covered several bonus cycles now and I’ve come to realize that no amount of justification or hand-wringing on the part of executives can put an average Wall Street bonus within the realm of normal-person acceptability. And I agree that Wall Street workers are, by and large, overpaid.

But I’ve also come around to the idea that if you have to overpay Wall Street workers, year-end bonuses might be a good mechanism for doing it. Big bonuses smooth out the cyclical ups and downs of banks and stabilize local labor markets, and they may even help the greater economy.

Let me explain what I mean.

In most jobs, a cash bonus is a perk. You might get one if you bring in a lot of new business or if your company does exceptionally well that year. (Say, if you work at a book publisher whose soft-fetish novels sell millions of copies.) But on Wall Street, “bonus” is really a misnomer. Year-end bonuses are built into the normal compensation process, and many are as big as, if not bigger than, base salaries. A VP at a bank might make $200,000 as a salary but get another $200,000 as a bonus (of which $100,000 might be in cash and $100,000 in deferred stock) the following January.

Paying very big bonuses and less-big salaries does two good things for banks. First, it keeps them from having to predict the future. Instead of having to budget X dollars for all employee pay in 2013, they can look back at the end of 2013, figure out where their revenue figures stand, and set their pay levels accordingly. Management loves this since it limits the risk of over- or underpaying people relative to the overall profitability of the bank. (Incidentally, individual bankers hate this because it puts a big question mark in their yearly earnings and makes planning their personal finances much more difficult.)

Second, paying big bonuses gives banks an easy way to cut a lot of costs very quickly when they need to. If they have a bad year, it’s easier for banks to eliminate variable costs than fixed costs. And in very bad years, cutting bonuses instead of salaries can mean needing to lay off fewer employees.

Banks are running out of room to cut bonuses. A widely ignored fact is that after the financial crisis, many Wall Street firms didn’t cut employees’ overall pay by much. They just shrank the cash portion of bonuses and paid more in salaries to compensate for the missing money. The bank VP who used to get 50 percent of his yearly pay in January was now getting a 75-25 split.

A JPMorgan research note from earlier this year shows this shift in action. JPMorgan’s analysts, led by Kian Abouhossein, crunched the numbers for Swiss banks (which have more of their compensation data available than American banks) and found that at one bank, Credit Suisse, fixed compensation costs (salaries and benefits) as a percentage of total “personnel expenses” rose from 66 percent to 86 percent between 2009 and 2011, while variable compensation expenses (bonuses) declined from 34 percent to 14 percent.

Making that switch — from a lot of variable pay to a lot of fixed pay — meant that banks gave up a lot of their flexibility and might (might!) have led to them laying off more employees than they otherwise would have. JPMorgan’s analysts wrote about this risk stating:

Increased regulation of employee bonus compensation has triggered increasing salaries and led to a higher proportion of deferred compensation levels, leading to a concerning highly fixed cost base for a volatile revenue business … We think going forward further adjustments in cost base might have to be driven by reduction of more senior IB staff in order to reduce the fixed cost base.

Now, maybe you think more Wall Street bankers should be laid off. That’s fine. But realize that in New York, at least, banker layoffs affect other industries as well. State Comptroller Thomas DiNapoli estimates that for every financial service job lost in New York City, two more jobs are lost in nonfinancial jobs in the city, and 1.3 jobs are lost elsewhere in the state. Taxi drivers, restaurant workers, real-estate agents — all of these people are included in that multiplier effect and are less able to get back on their feet after a job loss then laid-off Wall Streeters. (You could also argue that, psychologically, getting a big, year-end lump sum makes bankers more likely to put that money back into the economy immediately — by buying cars and houses and other expensive things — than if they got that money spread over the course of the year.)

Other than simple outrage at how much money bankers make, there are a few main objections to big Wall Street bonuses. The first is that they encourage reckless behavior by incentivizing traders to swing for the fences in an effort to juice their own pay.

But I don’t quite buy that lowering bonuses as a fraction of total pay solves this problem, since even in an all-salary system, traders would still try to boost their profits for personal gain. (They just wouldn’t see the effects until the following year’s salary hike.) In fact, theoretically, a bonus-based compensation system should actually reduce the risk of bad behavior, as bonuses — unlike salaries — can be clawed back in the event that something goes horribly wrong.

The other objection to Wall Street’s big-bonus culture is that, since banks helped wreck the economy and had to be bailed out, paying big bonuses is tantamount to rewarding failure.

Again, I generally think bankers get paid too much, and I think Ken Feinberg was right to try to cap bonuses during the bailouts, as some of what was in those bonus pools was taxpayer money. But now that TARP has been repaid, the government no longer has a say in how much banks pay their employees. So unless banks voluntarily adopt some sort of standardized, government-style pay-scale system — which they won’t — you’re not likely to see overall pay change that much relative to bank profits. More likely is that banks will pay a greater portion of bonuses in restricted stock, and less in cash, in order to kick some of their costs a few years down the road. (Morgan Stanley did this last year, when it capped cash bonuses at $125,000, but still made lots of deferred stock grants.)

This January is expected to be another horrible bonus year — “the worst bonus season since the crash of 2008,” according to the Post. That’s good if you’re opposed to big bonuses on principle and don’t care much about what replaces them. But since we know that “lower bonus” often means “higher salary,” Wall Street bashers and boosters alike should pause to consider whether lowering bonuses actually produces any benefits other than catharsis.

In this article:business finance, one percent, wall street bonuses