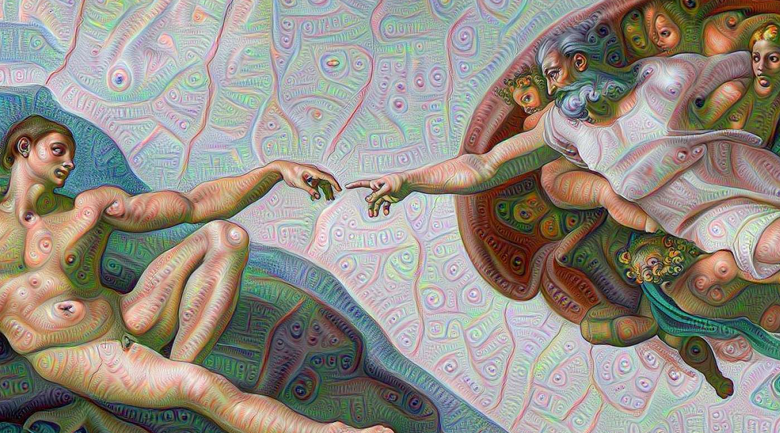 Google’s Deep Dream is making a huge splash on the web. It was originally coded by Alexander Mordvintsev, a programmer working in security systems who liked to play around with artificial intelligence as a side project. In the middle of the night last May, he discovered the lines of code that would cause Google’s neural net to generate original images that look like a psychedelic combination of Salvador Dalí and Lisa Frank. He posted his images on Google’s internal Google + account, and was soon paired with young programmer Chris Olah and software engineer/sculptor Mike Tyka to develop Deep Dream.

Read also: Pantone releases the 2016 colors of the year: Rose Quartz and Serenity

REM for your RAM

In July, the Deep Dream team released the software on GitHub so that the general public could turn their family portraits and vacation photos into bizarre art pieces. New apps are popping up, several grotesque portraits of presidential candidates have been produced, and the band Wilco used a Deep Dream image on the cover of its latest album. Samim Winiger, who created software that makes animations from Deep Dream images, says that “in five years we won’t recognize Photoshop,” alluding to the possibility for Deep Dream technology to become a major feature in our visual world.

But is there more to it?

Winiger refers to Deep Dream as “creative AI [artificial intelligence].” But can a computer be said to have creativity? The dreamlike (or, at times, nightmarish) quality of Deep Dream images has certainly caused some observers to posit that Deep Dream is pulling images from the “subconscious” of Google’s mind. But a computer, no matter how smart, is not a brain. So is Deep Dream just the robot equivalent of a cool party trick?

Deep learning in the neural net

But Deep Dream wasn’t created just to blow our minds with freakish four-eyed kittens and giant tarantulas crawling from the sky. It’s also a useful way for programmers to study artificial intelligence. Computers can now achieve what programmers call “deep learning” by processing information through a neural net (NN). Neural nets are meshes of artificial neurons layered one over the other, like spider webs. Information is passed through several layers of the NN, and each layer analyzes it from a different angle. The topmost layer is responsible for the output of information that has been “learned” by deeper layers of the net.

Google has made great strides towards teaching its neural net to visually recognize objects by having it produce an image of whatever it’s viewing, which is then graded for accuracy and fed back into the computer, giving the NN an opportunity to learn from its mistakes and eventually come to automatically correct itself.

So far, it has been hard for researchers to really know for sure what is happening at each layer of the neural net. But a researcher can have a computer produce a Deep Dream image from a specific layer of its neural net, thus revealing exactly what that layer is learning. In this way, researchers are discovering more about what happens inside an artificial mind.

What researchers have found is that computers may have higher perception and better pattern-recognition than humans. It’s like having a highly imaginative child watch clouds. If a cloud looks a little bit like a ship, the neural net will run the image through a feedback loop until a highly detailed ship emerges. This is why Deep Dream is able to create images even out of random noise – it can detect patterns that a human wouldn’t even notice.

This has far-reaching implications for how artificial intelligence may eventually replace humans. For example, researchers are using neural nets to read ultrasounds, detecting tumors invisible to the human eye.

So, is artificial intelligence becoming creative? Is a computer an artist? That depends on how you define creativity, and where you draw the line between the “real” and the “artificial.” But Deep Dream engineer Mike Tyka is impressed: “If you think about human creativity, some small component of that is the ability to take impressions and recombine them in interesting, unexpected ways,” – the same ability Deep Dream displays.

Regardless of whether or not this is true “creativity,” the world seems to agree with Tyka that when you let a computer come up with original art, “it’s cool.”

Steven Levy was granted the first interview with the Deep Dream team. You can read his report at Medium.com.