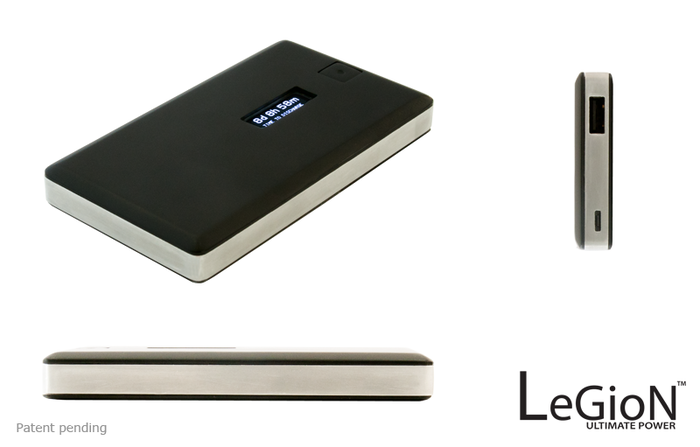 Legion is a portable energy source with a built-in Organic LED display coupled with a microprocessor. It can charge any USB powered electronic devices.

Unlike a traditional portable battery where you’re left in the dark about the state of charge of your battery, Legion learns how you use your electronic devices and displays precisely how much more time (days:hours:minutes) you have remaining until you run out of power. Legion uses premium grade Lithium Polymer batteries designed to maximize your energy density while packing it into the smallest area possible.

To use, simply press the power button. Once it is powered on, repeated presses of the power button will cycle through the menu allowing you to see current charge remaining, amount of time until Legion is empty, time until Legion is fully charged, health status of battery, number of charge cycles/battery age/battery temperature, battery voltage, amount of current being charged or discharged, and power in Watts.

Why does that matter?

Not all USB power sources are the same. USB wall outlets, desktops, laptops, and solar panels all charge your phone at different rates. With Legion, you will be able to identify which power plug is capable of delivering the most power to your device by simply toggling to the Watts and Amps menus.

The Watts and Amps menus will display your precise charge power and current in numeric form on the Organic LED display. This allows you to identify which USB power source is optimal for charging Legion or any of your electronic devices as quickly as possible. And when you are not using Legion, it detects that it is not being used and places itself in a low-power sleep mode. To turn it off, simply press and hold the power button.

Legion is seeking production funds on Kickstarter and has already met their financial goal, so the project will be funded after August 29th.

In this article:battery, legion, Tech