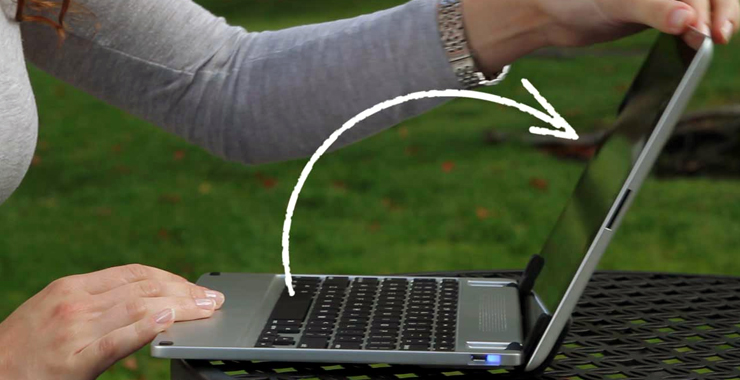 Adding functionality to an iPad

While most iPad users are content to use the touchscreen on their beloved devices, some have difficulty doing so, or have just not found their fingers to be fast enough without a keyboard. Enter The Brydge as demonstrated in the video above.

Bridge calls itself “an elegant solution to the lack of quality iPad keyboards and accessories currently on the market,” and offers aerospace-grade aluminum rather than painted plastic for the keyboard. It simply connects to your iPad using a hinge that the company has a patent-pending on, and connects via bluetooth.

The iPad clicks when attached properly, and opens and closes up to 180 degrees, acting as a keyboard and a stand for multi-media viewing. Additionally, the Brydge has an option for on-board speakers, which will be a bonus for many who have complained the stock speakers on the iPad are poor quality.

When connected, the Brydge and iPad together are roughly the same size and weight as a MacBook Air. The company says their goal was to make a product that is worthy of the iPad, as it adheres to the Apple design standards and aesthetic. The team used Kickstarter.com to fundraise, and raised more than three times their goal of $90,000. The device will ship this fall for $170.

As an alternative, if you do not have the patience to wait until this fall, or care to spend $170, and are willing to explore other options, we introduced you to the Logitech iPad keyboard that was previously $100 and has dropped to $79.99. It too has aircraft-quality aluminum and connects via Bluetooth, and although it is arguably not as sexy as the Brydge, it is a tested product and has extra features like padding to protect an iPad during a fall. Visit Logitech for more information.

In this article:iPad, iPad accessories, Technology