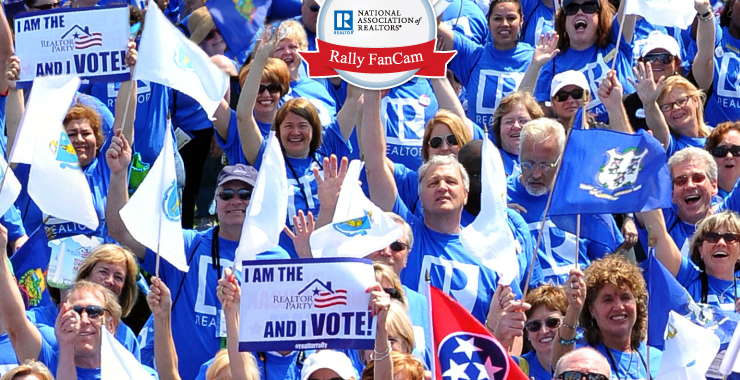 The National Association of Realtors (NAR), one of the largest trade associations in the world, began organizing a massive Realtor rally early this year with the goal of bringing thousands of Realtors to one spot in front of the National Mall to make a statement that Realtors are willing to fight for homeownership.

According to NAR1, the May 17th rally held during the NAR MidYear Legislative Meetings and Trade Expo attracted 13,000 Realtors and another 14,000 joined virtually, as 20 members of Congress joined the Realtors at the rally. One of the most interesting an innovative portions of the rally is what NAR has dubbed the “Fan Cam” which took a panoramic shot of the thousands of Realtors present at the rally, allowing each to tag themselves in the enormous interactive photo, giving the rally a longer shelf life as individuals continue to interact with and share the image.

The inspiration for the rally was the current threats to housing. Citing the President’s budget proposal that threatens to cut mortgage interest deductions, plans to potentially privatize Fannie Mae and Freddie Mac, the possibility of the government mandating 20 percent down on all home loans, and an increase in fees lenders must now pay to have their loans guaranteed by Fannie and Freddie should go up, the NAR considers these moves an attack on homeownership.

NAR President Moe Veissi said at the rally that homeownership is critical to the economy and to the American identity for the government to consider threatening it, particularly as the economy continues struggling. Veissi cited that six of the last eight recessions ended only after real estate recovered, so the association urges policymakers to consider strengthening housing through legislation, not threaten to destabilize the market.

Realtors as advocates for housing

Senator Johnny Isakson (R-GA) said at the rally that housing is “the answer to get us from where we are to where we want to go” and Representative Steny Hoyer (D-MD) said Realtors are the best advocates that homeownership could possibly have on Capitol Hill.

Realtor Magazine Editor, Robert Freedman writes1, “The message is clear. Home ownership is a bedrock value of our country, core to the American Dream, and, as AR President Moe Veissi put it, REALTORS® are the architects of the American Dream.”

In this article:NAR, National Association of Realtors