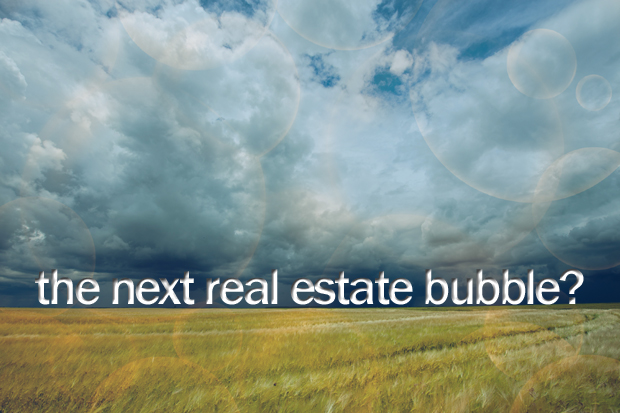 The next real estate bubble?

Various economists are ringing the alarm bells as are agricultural bankers, saying a farmland bubble could be on the way as the values of farmland skyrocket in America, just as they did prior to the farm crisis of the 80s, according to Reuters. Values in some parts of the plains jumped 20 percent over the past year which most believe is not sustainable.

Although the agricultural industry is performing well and farmers are using their increased profits to upgrade equipment and buy more land.

At an agricultural lending conference this week, Jeffrey Gerhart, head of the Bank of Newman Grove in Nebraska said, “As lenders, we are all concerned about a bubble. Is there a bubble? Yes. But it depends on how you manage that bubble.”

How to manage the bubble

Reuters reports, “Recent farm sales in big corn and soybean states like Iowa and Illinois have fetched as much as $13,000 an acre — levels unheard of, bankers at the conference said, and easily double the amount the land was valued at just a few years ago.”

Most farmland is bought by farmers to hold as part of their portfolio, but there are investors looking to farmings long term value and jumping on the buy and hold bandwagon, one of the hottest investment strategies right now with the forecasting of food scarcity in decades to come.

“We’ve all lived through a similar event,” said Doug Hofbauer, CEO of Frontier Farm Credit in Kansas. “I don’t know if the circumstances are nearly the same. So to say to that we are going to repeat a previous level of experience that we went through is probably unfair.”

Many expect a rapid correction in farmland values, and farmers have used their increased profits to pay down their debts which were at high levels, but some warn that without said correction, farmland could be the next real estate bubble and could hit America hardest in the Midwest.