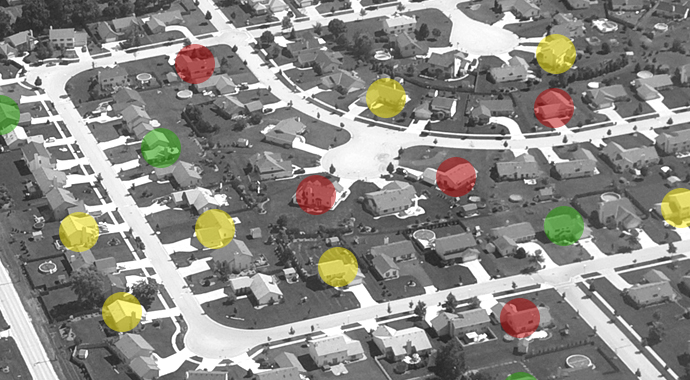 Positive signs for real estate – not so fast

In some markets around the country the inventory of real estate for sale, especially homes, has been significantly reduced of late. Buyers are racing to participate in bidding wars spawned by multiple offers on ‘killer’ deals.

I suppose in some of those markets what’s happening is organic in nature. However, it’s my studied opinion that may not be the case for most, if not all of ’em experiencing this phenomena.

Why this phenomena is taking place

The reliable facts can be found entering, leaving, and inside the foreclosure pipeline.

Add up the following:

Homes in the pipeline — Notice of Default served — process started.

Homes significantly ‘upside down’. Worth WAY less than loan balance.

Homes listed for short sale that never sell, ending up on the REO pile.

This is where it gets dicey. Who knows how many homes all that amounts to? I don’t. Ask those who’ve been keepin’ track, and there’s still significant disagreement on the ultimate number. However, they do seem to fall into a range.

Let’s use the low end here. The temporary backup in the pipeline is due to many outside forces, including, but not limited to the legal problems in the judicial foreclosure states, and banks dragging their feet for their own bookkeeping reasons. This is a minor hairball in the pipeline, not years of tree roots gumming everything up semi-permanently.

In other words, this too shall pass

When it does, there are gonna be folks all over the country wondering what on earth possessed them to not only voluntarily enter a bidding war in this economy, but pay far in excess of the asking price! I hope for their sakes I’m wrong about their specific  market, and they didn’t overpay. It’s my view this is but a bump in the road.

What makes it galling, is that so many first time investors will be sucked into it. Much like the bottom, which according to so many, has been reached several times in the last several years. There are still San Diegans not speaking to me. Not cuz I pleaded with them not to invest in 2007 — ‘at the bottom’. But that 18 months later they not only hadn’t believed me, but were down roughly 10%. Sometimes the only thing worse than being wrong, is being right.

I pray that I’m wrong

I pray I’m wrong about this — on so many levels. The problem remains. Those 4-6 million homes ain’t goin’ away. When the pipeline is cleared, the clog removed, we’ll be back to looking forward to a recovered real estate market. It should be an interesting look back in around 3-9 months.

The mistake that might be in play here, is that the fundamentals haven’t changed. Sure, reduced inventory is a fundamental. But, if said inventory was reduced as a consequence of a short lived ‘hairball’, then the fundamental never really changed, did it? Not from where I sit.

Again, I pray I’m wrong, and hundreds haven’t wasted their hard earned investment capital cuz ‘the worm has finally turned’. It ain’t anywhere near turning — that is, in my opinion.

4-6 million homes is what some call empirical evidence of a yet ongoing real estate foreclosure issue.