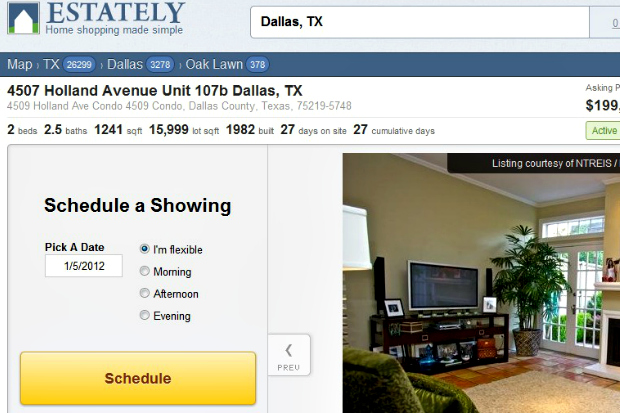 Expanding on the East and Third coast

Real estate search company Estately.com announced today their launch in Westchester and Putnam Counties in New York as well as the Dallas / Fort Worth market, expanding their offering further across the country, bringing their contextual search to more of New York and to the fifth largest metro area in America. The company places great emphasis on the Walk Score function of their search, noting that while Dallas is not known for being the most walkable city in America, New Yorkers are accustomed to taking walkability into account when moving.

Estately says their company “was created with the belief that home buyers need context when they’re looking for a home. At Estately you can learn about the surrounding area, the nearby businesses, the character of the neighborhood, the style, size, build date, history and price of a property.” In that spirit, the new coverage areas will also get their “awesome school search” and the ability to click on a school on the map to see its boundaries.

Estately CEO and Founder Galen Ward writes, “I want to point out that we aren’t just launching in the big cities of Texas. You’ll find Estately to the north in Sherman, to the West in Weatherford, to the South in Midlothian and to the East in Greenville. From an outsiders view point, Texas appears to be a state rich with flavors and fragrances, from sweet-sounding Flower Mound and Grapevine to the savory Mesquite and the potentially foul smelling Sulphur Springs. Our new New York markets that the average American may recognize include Yonkers, Poughkeepsie, and New Rochelle.”

Estately has come quite a long way over the years and offers a massive amount of easy to scan information for every listing and pushes users to make an appointment to tour a property which Realtors should appreciate. Take a look at the site to see how the depth of information offered with every listing by clicking the screenshot of a listing below:

In this article:Estately, News, Real Estate