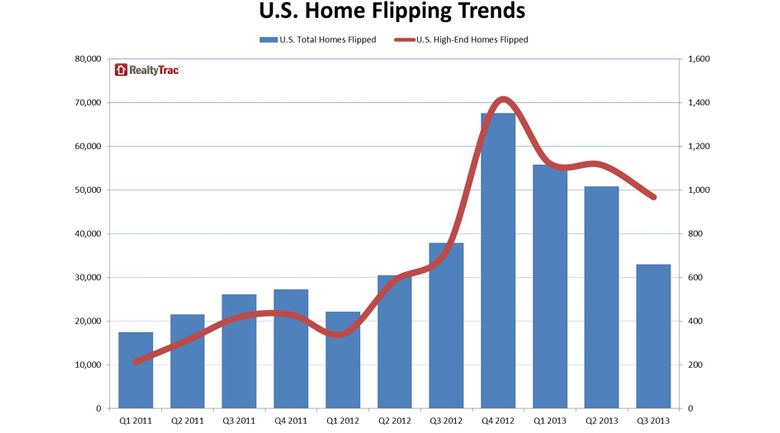 According to RealtyTrac’s Q3 2013 Home Flipping Report, the number of homes flipped (bought and sold within six months) dropped 35 percent from the second quarter, sliding 13 percent compared to the third quarter of 2012.

In contrast, real estate investors averaged gross profits of $54,927 which is 12 percent higher than just one year ago. RealtyTrac reports that the higher gross profit was driven in part by an increase in high-end flips on homes that were sold by flippers for $750,000 or more.

“Increasing home prices over the past 18 months combined with decreasing foreclosures have created a market less favorable to the high quantity of middle- to low-end bread-and-butter flips that we saw late last year and early this year,” said Daren Blomquist, vice president at RealtyTrac. “But the sharp rise in high-end flipping indicates there is still good money to be made for flippers willing and able to take on the additional risk of buying and rehabbing more expensive homes. With that higher risk also comes the potential for higher reward. The average gross profit on each high-end flip equals more than four times the average gross profit on each flipped home in the lower price ranges.”

“As rent and home prices escalate and the number of available REOs continue to decline there are fewer people who are buying homes to flip. House flippers are kind of a misnomer as they’ve turned into what I like to call ‘holders’,” said Sheldon Detrick, CEO of Prudential Detrick/Alliance Realty covering the Oklahoma City and Tulsa markets. “Being a house flipper meant buy it, paint it, sell it. Now it’s turned into buy it, paint it, rent it, and hold it.”

“Many of the urban flipping hot spots such as Los Angeles, New York and Atlanta have many areas in disrepair with low-priced inventory, making flipping an attractive option. Additionally, home price increases coupled with fewer foreclosures are creating a shortage of inventory with enough spread for profitable flipping,” said Doug Clark, star of Spike TV’s Flip Men. “The continued slow pace of new home construction has created a gap in the inventory today’s buyers desire. They want more modern homes with the latest features, and the new home builders aren’t meeting the demand. Flippers can often incorporate these features and get them into the pipeline very quickly.”

Today, Trulia reports that asking prices from October 1 to October 15 are up 1.0 percent from September, and home prices in Washington DC did not dip, which they say means the shutdown hasn’t directly affected asking prices – at least so far.

Trulia Chief Economist, Dr. Jed Kolko said, “The shutdown, of course, has had other effects on the housing market: most importantly, some mortgage processing has slowed or stopped. And a debt default could be disastrous for the housing market and overall economy. Thankfully, [yesterday’s] negotiations make these worst-case scenarios look less likely.Still, even if this month’s shutdown and debt ceiling debate are soon put to rest, the housing recovery continues to depend on Washington. Fed tapering, a new round of long-term budget negotiations, and Fannie/Freddie reform will all help shape the next phases of the housing recovery.”

Blomquist notes of the political environment, “The continued uncertainty will likely lead to fewer flips as investors lose confidence that home prices will continue to rise.” 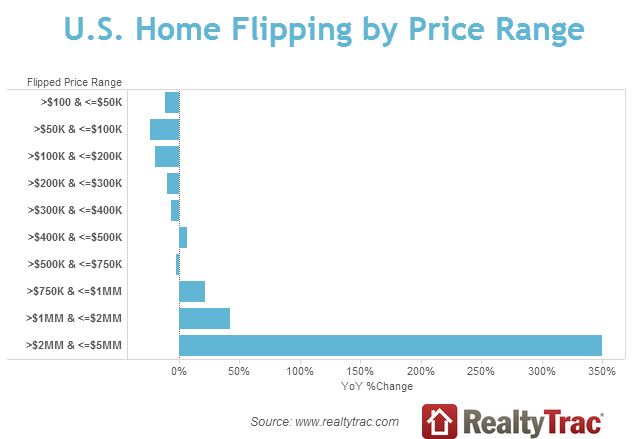 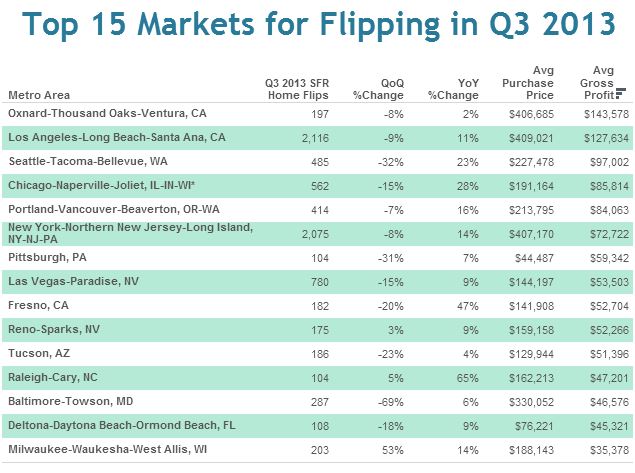