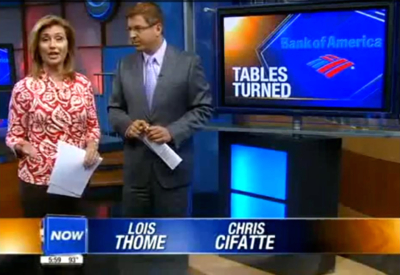 We’ll preface this story by noting that the saddest part of all is that nothing about the video above and what we’ll report below is of any surprise to us and probably no surprise to you. Stories like these are pouring in and consumers are finding ways to get back at the banks that wrongfully foreclose and become unavailable over the phone to these homeowners.

In Naples, a couple paid cash for a home owned by Bank of America who recently began sending foreclosure notices to their home. The homeowners hired a real estate attorney, sued, and the courts agreed that there was never a mortgage to foreclose upon given that they had paid in full. This scenario is even more egregious than the mistakes banks across America are refusing to deal with, citing case overload and typically apologizing after news outlets get involved.

The courts ordered Bank of America to pay the homeowners’ legal fees which were only $2,534, but as they had treated these homeowners prior to the Judge’s order, they became non-responsive and did not pay.

Rather than roll over as so many Americans feel they have to, the couple brought their lawyer, a moving truck, movers and two armed deputies to their local branch that was not responding and the deputy instructed the bank manager turn over all assets in the branch, including furniture, desks, file cabinets, and even the cash in the drawers.

An hour later, Bank of America cut a check, claiming they instructed payment of an attorney that they were not aware had since gone out of business.

Other Bank of America sins

Many banks ended 2010 by freezing foreclosure processes after many states’ attorneys general called for a freeze, and banks including Bank of America have gotten better at processing short sales, but the wrongful foreclosures continue.

There is a slowly emerging trend of the rare American household that wins the David versus Goliath battle against banks wrongfully foreclosing on them. In February, a homeowner made headlines by foreclosing on a Wells Fargo branch in a similar manner to the couple mentioned above. An Austin homeowner went on a hunger strike when Wells Fargo wouldn’t rightfully modify his loan and most impressively, just this April, military officer won a $21 million lawsuit against his lender for wrongfully foreclosing upon his home.

The frustrating element of all of these wins is that a dirty, lengthy battle was drawn out and even when a homeowner fights a wrongful foreclosure, they don’t always win and in most cases, they never make headlines. The fact that this behavior has continued by the banks after all of the drama in the past years is astonishing and wrong and must stop… it shouldn’t take homeowners like this couple showing up at their branches to demand a measly few dollars because of a stupid paperwork error.

In this article:bank of america, foreclosures, News, Real Estate News