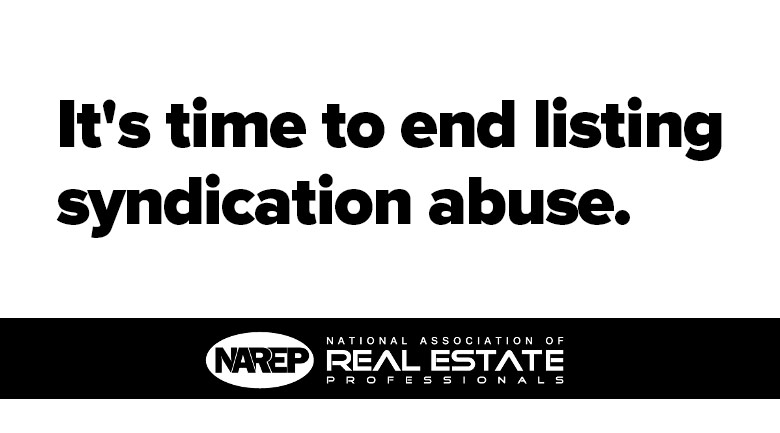 The launch of a brand new association

Tomorrow marks the launch of the National Association of Real Estate Professionals (NAREP), an organization that Co-Founder Ben Caballero says is “a new real estate trade association that is intended to counter the questionable practices in which Zillow, Trulia, and REALTOR.com have been engaging” by creating a non-profit that is a “high profile” and “reliable” alternative national listings site to replace the current syndicators and be “free of all of these shenanigans.”

Real estate listing syndication has long been a contentious issue in the industry, and NAREP (not to be confused with the National Association of Real Estate Publishers) seeks to take action. In a statement the organization explains that they were formed to address “widespread backlash among real estate professionals who are frustrated with controversial practices by a growing number of real estate marketing websites. These sites rely in large part on listing data syndicated to them from local multiple listing service (MLS) databases nationwide,” taking aim directly at Zillow, Trulia, Realtor.com, and “other real estate websites.”

Drew Meyers is the founder of Oh Hey World, who was with Zillow from 2005 to 2010, acting as a very public face for the organization. Responding to the “shenanigans” NAREP says their mission will fix, Meyers said, “For me to believe a single word on that site, they need to show me the money (in the millions) and team that is going to execute on that statement.”

Coordinating the pulling of all syndication

Once NAREP achieves membership representing 25.0 percent of the real estate listings nationwide, they intend to coordinate its members to cease all syndication and sharing of their listings to non-MLS websites.

“This action will eliminate a major portion of the inventory on Zillow, Trulia, and other such sites,” according Ben Caballero, NAREP’s co-founder and chairman. “Businesses such as Zillow and Trulia, in their effort to profit from real estate professionals, display MLS listings, yet many of them are outdated or duplicated. Some listings on their sites do not even have addresses.”

NAREP cites an industry study released by Redfin and The WAV Group last week, which concluded that about 36 percent of listings shown as active on Zillow and Trulia were no longer for sale in the local MLS, compared with zero or near-zero percent for the listings shown on brokerage firm websites. Some industry insiders question the accuracy of the report’s results, but syndication accuracy remains a hot button issue in the industry.

When asked about NAR’s role in listing syndication, Caballero told AGBeat, “NAR is too close to the issue to be objective. Its relationship with move.com appears to have influenced NAR’s decisions. NAR has a different set of rules for its members than it does for REALTOR.com and listhub.com. For example, NAR prohibits brokerage firms from commingling listings on their web sites from any source other than from MLS, but it allows REALTOR.com to do so.” 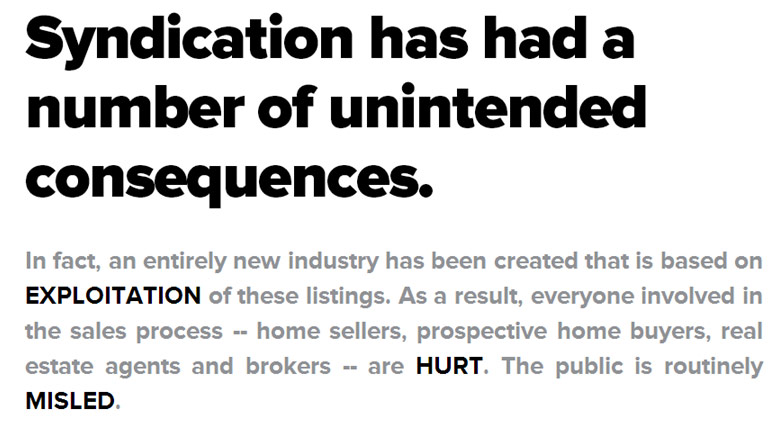 NAREP’s position is that in their haste to generate income, Zillow, Trulia, and other websites have diminished the credibility of real estate professionals by “misleading, confusing, and frustrating consumers,” said Caballero. NAREP aims to launch its own national real estate listing website, complete with all MLS listings nationwide, to resolve the controversial issue of listing syndication that has caused concern within the real estate industry.

The organization plans on “conspicuously” displaying the listing agent’s contact information prominently next to their listings at no cost, and they say that in an effort to ensure accuracy, their national website will use and regularly update data exclusively from local MLS databases. To participate in the new website, NAREP will require its members to discontinue syndication and sharing of their listings to all websites that are not owned or operated by an MLS or their members, stating that “Zillow, Trulia, and REALTOR.com do not meet these criteria.”

Beginning tomorrow, NAREP will begin accepting registrations for membership on its website. As for the universal question that will be asked, the answer to “who is Caballero?” is, according to a NAREP statement, “Caballero was the top individual real estate professional in the United States for 2010 and 2011, as measured by unit sales and dollar volume, with more than 4,500 home sales exceeding $1.2 billion in total value.” According to his statistics, the average sales price of his Texas listings is $266,666.

We asked Caballero why now? Why not years ago? Why not later? “The problems have dramatically escalated only in recent years as Zillow, Trulia, and move.com have optimized their capabilities to drain traffic away from brokerage firm web sites,” Caballero said. “Increasingly, we learn about consumers who become confused after visiting these sites, or they don’t end up getting the best information as the listing agent’s contact information is not readily accessible. Often it is overshadowed with an agent’s contact information who has paid for prime positioning.”

Caballero added, “These companies are e-commerce marketing firms that are solely interested in selling leads to real estate agents and brokers.” 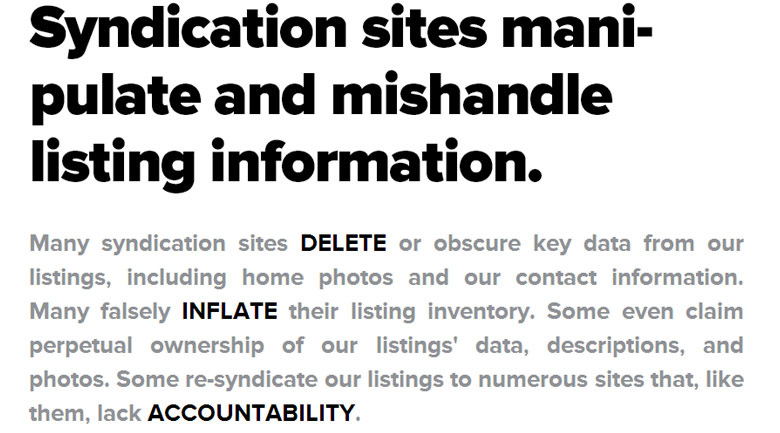 Could RPR do the same thing?

Next month, Realtors Property Resource (RPR) will become available to all Realtors, even if their local MLS does not support it, which is another ball of wax altogether. It is notable, however, that with a flip of the switch, this tool could become consumer-facing, with some simple bylaw changes at the National Association of Realtors (NAR). Could they possibly be working to the same end? It has been said many times that that is not a goal or in their plans, but one has to wonder if NAREP is taking an agent/broker approach to what RPR could do?

The big question is does this jive with the NAR’s anti-trust settlement with the Department of Justice? Is everything the NAREP is claiming they are going to do legal and above board on a local and/or national level? Given how complicated the listing syndication rules, bylaws, local, state, and federal laws are, it is concerning that a well meaning fledgling group could be stepping into something inadvertently and handicapping itself before it even gets started.

Additionally, the big three are publicly traded companies, ingrained in the minds of consumers and business plans of over a million real estate professionals – could a grassroots group that wants to create an alternative by pulling listings from syndicators do enough damage to the syndicators that consumers would notice? And further, will consumers trade their loyalty for their current favorite site for another site, or is this all over their heads and truly an industry insider matter known by few and understood by far fewer? 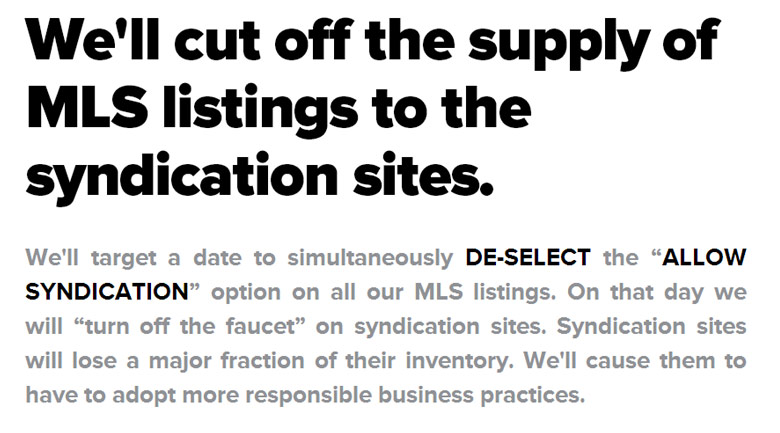 Update (October 12, 2012, 4:13PM cst):
At the request of Caballero, we add the following:
“NAREP is organizing as a 501(c)(6) trade association. We are not attempting “to replace all non-MLS real estate search sites,” but we will provide an alternative if they do not adopt more responsible business practices than what they currently have in place. NAREP sees their current practices as a form of syndication abuse. We want that abuse to stop. By taking back a noteworthy fraction of our MLS listings, we will exert meaningful pressure on Zillow, Trulia, Realtor.com, and others and cause them to clean up their acts, but we are are not aiming to put them out of business. We must see something from them that is more equitable for consumers and the real estate industry than what they currently have in place.”