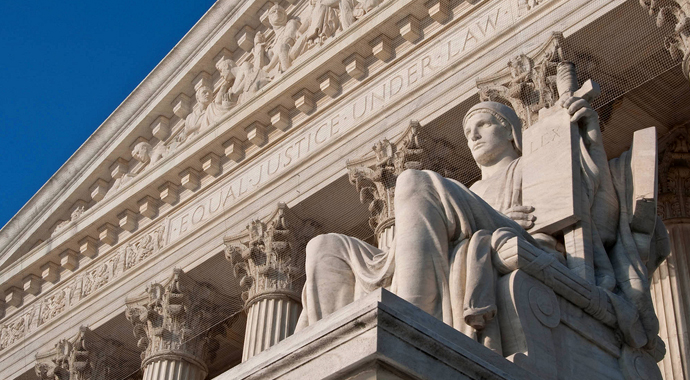 The U.S. Supreme Court has ruled unanimously that property owners have a right to a hearing to challenge the government’s threats to fine them for alleged violations of the Clean Water Act1.

The court sided with Mike and Chantell Sackett who for six years have fought back against an Environmental Protection Agency (EPA) order that blocked construction of their new home near Priest Lake in Idaho, threatening fines of over $30,000 per day. In 2005, the couple purchased a .63 acre lot, began preparing for construction on a small three bedroom home, and construction was halted in 2007. The property has been untouched as the agency said the property could not be disturbed without a permit as it was deemed wetlands.

“Compliance orders will remain an effective means of securing prompt voluntary compliance in those many cases where there is no substantial basis to question their validity,” Justice Antonin Scalia said in an opinion issued. Further, in court he noted that the Sacketts have never “seen a ship or other vessel cross their yard.”

The court rejected the EPA’s argument that their ability to deal with pollution would be compromised if property owners had quick access to courts to contest their orders.

Six year battle against the EPA

The Sacketts had long contested the EPA’s determination that their small lot contained wetlands which are regulated by the Clean Water act, asserting that there was no reasonable means to challenge the EPA order to stop construction, unless they wished to risk daily fines.

Justice Ruth Bader Ginsburg commented in an opinion that the only decision made by the Supreme Court was the couple’s ability to contest the EPA finding that their property is subject to the Clean Water Act. Justice Samuel Alito urged Congress to address confusion over the EPA’s reach regarding the Clean Water Act, noting the EPA can currently claim authority over any property wet for even part of the year, not just waterways.

As a result of the ruling, the couple will be allowed to argue in federal court that their land should not be subject to EPA regulation.

The wide reaching support for the ruling

Dozens of groups ranging from general contractors, agricultural businesses, business groups and home builders joined the couple to push the court to allow for the contesting of EPA compliance orders.

National Association of Home Builders Chairman Barry Rutenberg said in a statement, “Home Builders support sensible policies that protect the environment, and they support the goals of the Clean Water Act. But they do not support the imposition of regulations that cannot be challenged. That was the case here, as the EPA was answering to no one as it expanded its authority under the Act. This ruling provides a check on EPA’s capricious expansion of its regulatory authority. Finally, home owners and home builders have a way of challenging EPA compliance orders before they face big fines.”

In a statement, the Sacketts thanked the Supreme Court for “affirming that we have rights, and that the EPA is not a law unto itself.”