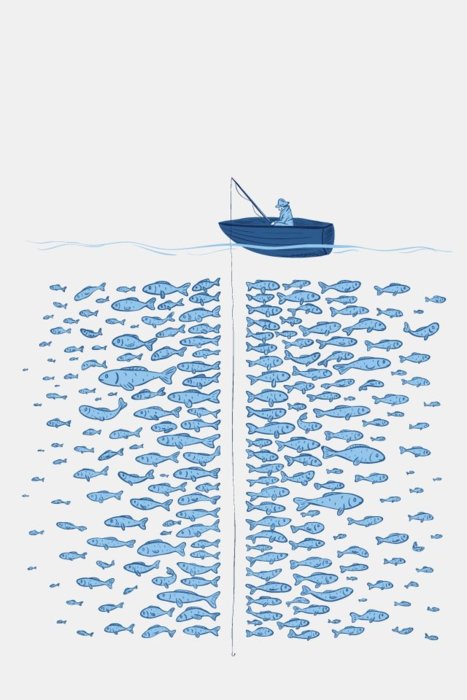 In a down economy, most businesses suffer. Some adapt and some fail. In hard times, most professionals look around them and wonder what happened to the pipeline they had so carefully built over the years. Many look like the fisherman above and feel like there are plenty of fish but they just aren’t biting. It is at this point that many give up, but for the resilient leaders of the bunch, it is a different story.

Ralph Waldo Emerson said that “People only see what they are prepared to see.” Most people in the boat above will admire themselves for being patient and sitting still, but those people will go home without fish. A resilient leader of any business will carefully stand up in the boat and look down to see the enormous schools of fish that require ingenuity to capture. Some leaders will take the blast approach and throw a grenade in the water, while others will try multiple fishing rods with various lure types. Both approaches lead to fish in the boat, and both require thinking outside of the box.

In a desperate economy, the ingenious are the survivors- sitting still never got anyone through a recession. Business leaders are trying new business models and new marketing tactics. Investments are being made and cut in various areas in an effort to try out new lures or grenades, and the pipelines of the few will be filled with the fish, because the “patient” leaders are letting the fish go with their well-meaning but failed approach.

What are you doing in your business to catch fish? What are you trying that makes you a resilient leader? How are you catching the fish that others are letting go by not taking action? Are you trying that new vertical that you’ve been considering for years? Are you going to a new networking event that is yielding new business? Or are you sitting still in the boat, hoping that the fish will magically see you?

In this article:leadership, News, Sales