REALTORS Complain About the Code 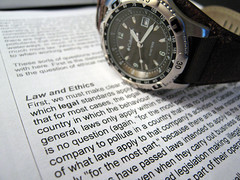 It’s too harsh or restrictive – or its not restrictive enough. Its enforced too harshly, or not harshly enough. There always seems to be some issues about the Code of Ethics. The first Code of Ethics was published in 1913, five years after the founding of the National Association of REALTORS. It has been changed numerous times and has had as many as 34 Articles, though currently there are only 17 (and only one of those deals with money disputes).

The Code has survived so  long, and been as effective as it has, because the Code is a living document, reviewed and modified every year. And in that process the voice of any member can be heard.

So How Does it Work?

Those members who do not attend these meetings can always send a letter directly to the Professional Standards Committee at NAR’s headquarters in Chicago. Sometimes letters will come from local or state associations who have a concern either about the Code, the standards of practice, or the enforcement of the code.

If the item passes, then the real fun begins.

Though presenting to the Leadership team of NAR is intimidating, presenting in front of the all of the directors of NAR is as daunting a task. The committee chair presents the recommendation to the Board where it is discussed yet again, and either sent back to committee for further consideration, defeated or approved. If approved, the matter is published and distributed to the members. And that dear REALTORS is how the changes are made to the Code of Ethics, the Standards of Practice, and the manner in which they are administered.

In this article:NAR, National Association of Realtors, Real Estate