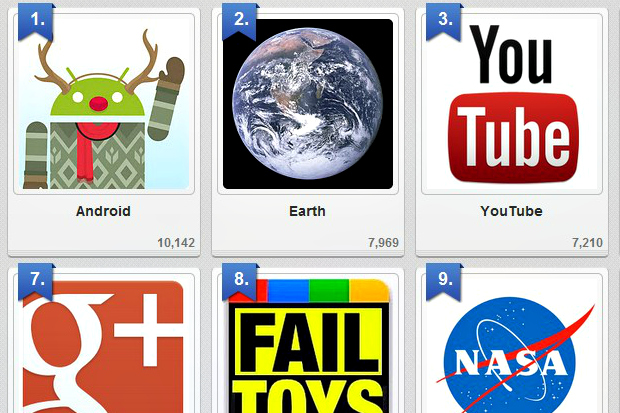 According to statistics tracker, Zoomsphere, in the six weeks since Google+ launched pages for brands and allowed companies into the social network, many have quite successfully garnered a wide following with much of the top 10 most followed list comprised of celebrities like Justin Bieber and Eminem, but looking at which pages have been most shared by Google+ users, a very different picture emerges.

Fully 7 of the top 10 most shared Google+ Pages are about Google products from number one Android with 10,142 shares to Gmail at 5,620 shares. Although the share counts are nowhere near as high as follower counts, following isn’t as publicly an endorsement as sharing a link to a Google+ Page on your own Google+ profile.

*All Pages that relate to a Google-owned product.

Why so much sharing about Google?

When Twitter launched, although it was common to talk about what you were eating for breakfast, a massive number of early adopters were trying to figure out how to use the service not only for fun but for their business and were forming a culture based on how collectively it was decided the culture should be, in spite of what the founders envisioned.

The same goes of Google+, many people are sharing information about the social network and its sister products. If Apple launched a social network tomorrow, most of the chatter would be about how to use the network, how the network should be used, and about Apple products, ultimately, like minds attract.

The atmosphere of what is shared will change dramatically as Google+ goes mainstream, but as the culture is still developing itself, much talk on Google+ is about Google+ or products related.