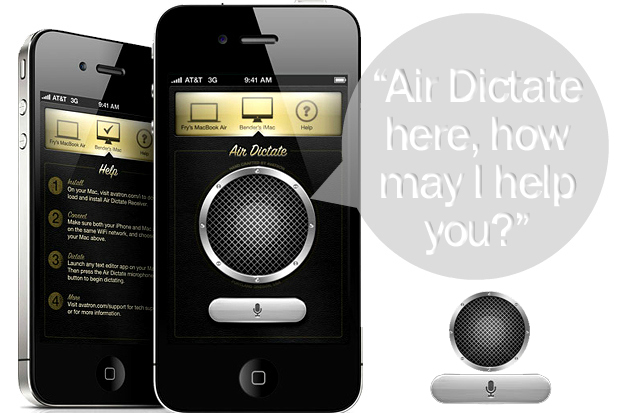 This summer, app development firm Avatron.com launched “Air Display” which turns an iPad into a second monitor for a Mac or PC wirelessly. Now, the company has released a 99 cent app called Air Dictate which is so much more than just a voice-to-text app, it takes your voice from your iPhone 4S and wirelessly syncs with your Mac and places the text into any input field you desire.

It takes very little tech knowledge to set up, the devices simply need the app downloaded (to both) and to be connected to the same wireless network. The app is built on the public API for the iPhone personal assistant app called Siri. Reviews are extremely positive so far for the app and most claim the dictation accuracy to be superior to several dictation programs, plus we like that you can dictate emoticons through the program.

We see AirDictate being used as traditionally as dictating to an administrative assistant and is helpful for people that need to transfer their meeting notes into an email but are not exactly rapid typers. AirDictate is helpful for blogging, and for dictating into Google Docs, Word or any program that allows typing. The app could be a huge help when participating in a web chat or in other live situations where slow typing may restrict participation.