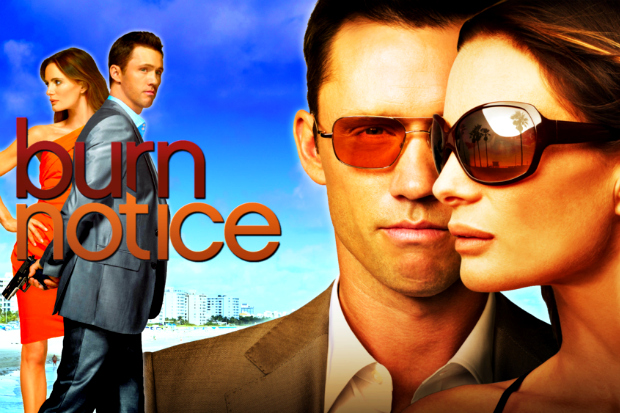 Learning from a spy show

I’m completely obsessed with Burn Notice. I’ve been putting off watching it because it’s my kind of show and well, entrepreneurs often have to give up things like watching TV, at least for short periods of time, to get things done.

Well, I’ve been doing pretty well lately, so my reward at the end of a day of hitting all my major goals is four solid hours of Burn Notice, from the first season. Of course, I’ve also been using it as research, so that’s two birds with one stone (What a barbaric expression. Who says I want to kill ANY birds?).

If you’ve never seen it, it’s a show about a spy, Michael Westen, who gets what’s called a Burn Notice – he’s blacklisted as a spy, losing his job and his status. The episodes are about him trying to get his old life back, what he does in the mean time, and sometimes, his thoughts about whether he should or not.

There’s a lot you can learn from it, short list:

I’m mostly reminded that visibility is about ego

I could go on forever – honestly it does well so far, at reminding me of things that I’ve forgotten than teaching me new things. But that’s just as useful. And the thing it has reminded me of lately, through all of those things, is about how much of being visible on the web is about the ego. A couple of years ago, I did a whole series about how it’s related to quelling your ego, and knowing the line between where it ends and you begin. Of course, most people think their ego IS them. Whether you’re in that camp or not, recognition of other people’s egos can help you get pretty far in web visibility.

An ego is actually not an inherently bad thing. It’s good to have a little swag, as long as you’re controlling it, instead of the other way around. So no matter how healthy the next guy’s ego is, knowing how to go up against it gives you a lot of hints about how to conduct yourself when forming business allies.

And if you want to have online visibility, without having a large budget or massive free workforce, no matter how spectacular your product, you need allies. People who will spread the word about you, write positive press about you, customers who love your product so much that they’ll defend you against reputation attacks even when you’re not around.

It’s a delicate issue though. No one likes to feel used, and only the grimiest people like to use people. Instead, it’s best to form business relationships based on providing value.

And if you’re seeking this end, it’s better to learn about egos beforehand. They can complicate the simplest interactions.

The inverted ego of those that look up to you

“Drop me in the middle of the Gobi Desert, bury me in a goddamn cave on the moon, and somehow, she’d find a way to call me and ask me for a favor. ”
Michael Westen’s character in Burn Notice, referring to his mother, Madeline Westen.

More on why you don’t want to be the person who’s only in it for the favors in a minute. First, a story.

Once upon a time, I took several sales and marketing seminars. I learned things that to this day are helping me profit, now that they’re second nature. For example, I learned that when you are an independent sales person, you start off by networking within your warm market.

Most people hear this and think “sell stuff to your friends.” I always thought that was dumb. But way before the term inbound marketing was created, I’ve been an inbound marketer — I like my best leads to come to me.

So what I would do is get my most important, pivotal friends on my side and willing to help me to introduce me to the people in their network I could talk to about finding people to come to me.

Besides, when you’re confident and passionate about what you’re doing, the folks who made the intro will come to you, too.

Anyway, when you find this warm market, it’s typically split up into three groups, people who look up to you, people who see you as a colleague, and people who you look up to as experts or just that you respect for whatever reason.

With people who look up to you, you’d treat them the way you want people who you would look up to would treat you. If your favorite author was Stephen King, if all you had to do was get on a plane, right now, and fly to another city to have lunch with him, you’d probably do it.

Or if your mentor called, you’d cancel a date to have drinks with them.

Think about what the people who look up to you want. If you can, just come right out and ask. Chances are something on their list will take you only a little time and effort and will mean the world to them.

But do it now, with no immediate motive but having them in your corner. The day before you need them to do a blog post about you is not smart timing.

The healthy ego of peers that see you as equals

“When you work solo, it’s about prepping the ground… You never know what’s going to happen. You prepare for everything.” –Michael Westen’s character in Burn Notice.

We all have colleagues who are trying to get to a waystation in life that may be the same size as ours, but is in a different location. You run an apple stand, they have a vegetable cart. Chances are there is some overlap in your audience, but very little competition.

With peers, it’s easy. You team up. Everyone gets something out of the deal and if you do it right, your customers are happy too. You want to be prepared for everything?

Get a crew small enough to still be tight-knit, and big enough to cover all the skill sets and talents you’ll need in a scrape. Small business owners get in plenty of tight spots, believe that. You’ll need to have all bases covered.

But steer clear of people in your industry with unhealthy egos who are at your same level. Sometimes your head looks like a stepladder to these folks.

Egos of people you’d only dream that would help

“Powerful people don’t like being pushed around. You can never quite predict what they’re going to do. Or have their washed-out special forces security guys do.” –Michael Westen’s character in Burn Notice.

There are three main types of ego. A healthy ego is all about having confidence and flair, with the appropriate dash of humility. An inverted ego is self-depreciating and incredibly humble. That doesn’t mean this person doesn’t have an ego. It just means their ego is inverted – they get their chest poked out from being recognized for being gracious and humble.

Again, nothing wrong with that. Still falls into the healthy range, but the difference is important when you’re looking at how to deal with forming allies. We dealt with that one already – most of the people you look up to are unlikely to have inverted egos.

The third type is the hardest to deal with, especially since it often manifests itself suddenly, when it feels threatened, which is very very often. If you want someone with an unhealthy ego to help you with something, well, good luck with that.

Except. That’s probably your best approach, your appeal of help, in public, to “the only one that can help me”. Get an introduction in public, follow it up with a respectful but public plea (in an appropriate forum of course). People with unhealthy egos might help you just to show how great and powerful they are.

Then again they might not. Again, good luck with that.

No, the best idea is probably to find someone with equal pull, way before they would ever need your help, and find a way to get something done that they need, in a timely fashion.

They mention they’re interested in a certain author’s new book? Get them an advance copy. They want tickets to a game? A quick retweet? A new programmer?

Find out how you can be of help to them without getting in their way or making their life more complicated – again, providing value.

The answer is always provide value by the way – it’s just that for each type of person, how to be of most value is different.

Not only did it used to be a guessing game, but it was hard to have an open channel of communication between you and the person who could most help you. There were secretaries, appointment books, phone trees, all types of gatekeepers.

Finding the path of least resistance

Now there are few. Which means everyone is trying to get everyone else’s attention. Your job is to find the path of least resistance and bring the most to the table.

It’s not the squeakiest wheel that gets the grease anymore. It’s the most trustworthy person with the experience at squeak prevention.