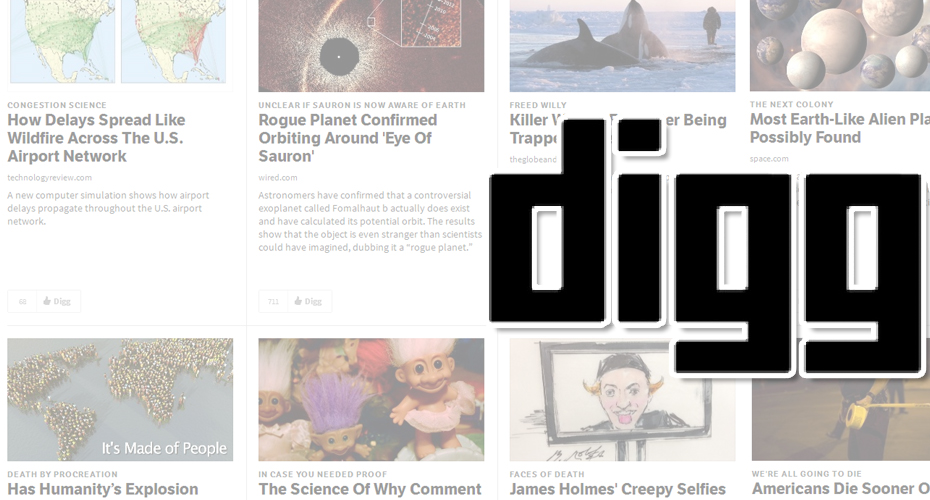 After enjoying their glory years from 2004 to 2008, Digg took a dip around 2010 in light of increasing popularity of content curating competitors like Reddit, and many believe the updates the company made detracted from the user experience rather than enhancing it. Last fall, Betaworks acquired the site and renovated the very structure, offering new design and function.

Today, the company announced they have doubled the number of users, offering a glimpse into what could be the company’s comeback. “We released an iPhone app, an iPad app (both featured by Apple), an email product called The Daily Digg, and a site redesign,” they noted on the Digg blog. “We doubled our users, publishers are starting to notice “the Digg effect” once again, and most importantly, users think we’re on the right track.”

They call the offering about one percent completed, and take to the blog airwaves to talk about monetization as part of their future plans, offering endorsement of apps through paid sponsorship, which requires application, payment, and approval.

As it stands now, the site places stories into a hierarchy of “top stories” followed by “popular” and “upcoming,” and now, you’ll see “Apps We Like (Sponsored)” in the stream.

Top stories are ones that have been posted on to the site and received enough user Diggs and social media mentions to be displayed at the top of the page. Popular stories are ones that are receiving the most Diggs and mentions in the past 18 hours and each story is accompanied by a chart showing its peaks and valleys of popularity during that time. The more Facebook likes and tweets a story gets, the higher the story is presented in this section. Finally upcoming stories are ones that have just arrived on the site due to social media shares and mentions. In order to move up in rank, users Digg the stories they’re interested in and watch them move up the list.

Doubling their users and proving the merit of the visual web, the company reveals insight into the average internet user today, as we all move away from endless lines of text to preferring visuals – large pictures and graphics, to be precise. The “visual web” continues to rise in popularity, enabled and accelerated by the use of mobile devices.

Last year, we opined that “images are not only rising in prominence because the tools have made it easier, but because editing tools have become more readily available, and smartphone/tablet photography has gone mainstream, even with professional photographers. The mobile photography niche has risen dramatically, thus the rise in popularity of Instagram. A photo invokes a stronger response than written word, especially with the A.D.D. culture of today wherein we all have dozens of tabs open on our computers and are using multiple apps all at once. The visual web is rising, and it’s not stopping anytime soon.”

In this article:digg, Social Media