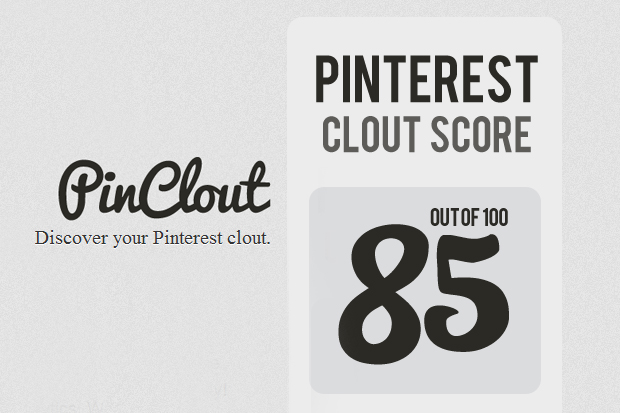 AGBeat has led the conversation surrounding visual bookmarking site, Pinterest.com by showing you months ago how to use the site, then demonstrated how it can be used in business and have even shared tips on adding Pinterest to your Facebook Page. The bandwagon is big and not only is traffic to the site exploding, interest in the site is as well.

We waited for Klout to integrate Pinterest into their offering, but they have not, so there is a void to fill in the era of social proof. Last month, AGBeat broke the story on a then-stealthy PinClout which allows users to discover their influence on Pinterest based on eight factors – total pins, total repins, total boards, total likes, total comments, total followers and total following. A quick look at the scores on their landing page, they are all quite low which could possibly be because most users are so new to what is still an invite-only network. The company tweeted, “We will be much more than just a score, planning to roll out powerful trend data and analytics soon.”

End of the road for PinClout?

According to TechCrunch.com’s Anthony Ha, PinClout has received a cease and desist letter from Klout for trademark infringement for being “confusingly similar” to their trademark. PinClout says they will be changing the name of their company but will continue scoring, as the metrics and purpose are different in the first place.

The etymology of the word “clout” is fascinating – it dates back to Middle English, before the year 900, originally meaning “lump of something” (clut), then by the 14th century meant to strike with the hand and from the power of a strike, it took on the meaning of “personal influence” by 1958. There is irony to be found in a company named after a violent hand strike suing another company for use of the very word that meant “strike with the hand” which has only meant “influence” in recent memory.

Any tech company who has been around for more than a week has received a cease and desist letter, so this is nothing new. Brands typically have three choices when a c&d shows up – (1) fight it, loudly or (2) comply, loudly or (3) hide in the shadows. It appears PinClout will pick the second choice, which is often the most powerful and can boost a brand’s visibility overnight. PinClout (or whatever it will soon be rebranded) isn’t over, and this could be the boost that they need to gain legitimacy in the eyes of the influence-score haters.