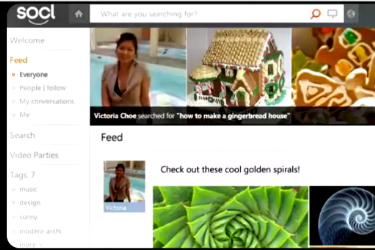 It was reported that Socl is built on HTML5 and users can share videos, watch video simultaneously with other users while chatting about the video, called a “video party,” and integrates search into the platform in the form of tags. Socl offers social search which is very vaguely described but it seems to be a vehicle for users’ searches to be visible to other users in an effort to get their input a la Yelp as a collaborative search, emphasizing a user’s social graph.

We wrote last month, “Most of the features in the social network are already apparent in other social networks, but it looked like Microsoft is counting on a slick user interface and users’ fatigue from other sites to fuel adoption. It is interesting that the Socl.com URL was created in 1998, 13 years ago and while it is not clear whether or not Microsoft was the original owner or if they purchased it for this new project, if they did own the URL, what did Microsoft foresee in 1998?”

But So.cl is not for you

Why is So.cl not for you? Because it was recently announced that So.cl is actually a social network and research tool for students, not for businesses, not for professionals, for students.

Microsoft said in a statement:

“The web, search, and social networking are changing the way students collaborate.

To bring these elements together, Microsoft Research’s FUSE Labs is launching a site designed to give students the ability to network with peers, share useful information quickly, and build their own pages that collect information from both inside and outside the classroom—in a sense, transforming the web and social networks into the new classroom.

Called So.cl and pronounced “social,” the experimental research project is being made available to students in information and design schools at the University of Washington, Syracuse University, and New York University. In time, more schools will be added, potentially expanding So.cl’s use as a learning and information-gathering tool.”

Will the ever make it more consumer facing? It is possible, although they express otherwise. Facebook began as a closed network for students, could Socl experience the same fate or will the experiment with Socl and build a separate network? Tell us in the comments what you think.