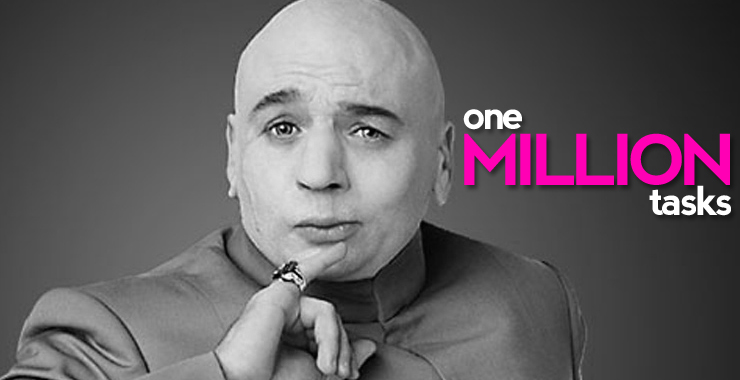 One of the most useful internet tricks is tying digital tasks together through the “if this, then that” tool, ifttt.com, which today announced1 that they have hit the one millionth task creation mark, and just as a company that specializes in simplifying life would, the company announced by simply saying thank you on their blog. Really, that was the text of the blog post, “One million tasks created! Thank you! The ifttt Team.”

When a commenter on the blog asked what the lucky one millionth task creator wins, ifttt’s Linden Tibbets playfully wrote, “Haha, an all inclusive trip to… Will have to wait for 10 million before we starting thinking about prizes :)”

Using the “if this, then that” conditional logic we all learned in middle school, ifttt.com refers to itself as the “duct tape” that holds together social networks in a completely custom way. AGBeat introduced you to ifttt last fall, offering insight as to how the simple tool works and how genius it is in connecting all of the separate social networks together automatically. Then, in November, ifttt partnered with Buffer, allowing for updates and tasks to be scheduled into the future, solving yet another problem in the digital marketplace.

Our favorite analogy of how the site works is on the ifttt blog – duct tape and lightsabers… “ifttt isn’t a programming language or app building tool, but rather a much simpler solution. Digital duct tape if you will, allowing you to connect any two services together. You can leave the hard work of creating the individual tools to the engineers and designers. Much like in the physical world when a 12 year old wants a lightsaber, cuts the handle off an old broom and shoves a bike grip on the other end, you can take two things in the digital world and combine them in ways the original creators never imagined.”

We have shared many of the hacks available through ifttt, from sending all starred Gmail messages to Evernote automatically to having Twitter update your bio if you update your Facebook bio. Genius!