According to a new study1 by ComScore, amplification is one of the most important aspects of social media marketing as a means to drive purchases. The study analyses the value of a brand’s Facebook fans, noting that fans are only one component of purchases, noting that brands must factor in the potential amplification to friends of fans. As fans interact with a piece of content on a Facebook Page, they make their friends aware of it as it is posted on their timeline.

ComScore has teamed up with Facebook to produce the report, which has some questioning the validity and objectivity. Despite that, even if partially true, brands can tap into a very advantageous position by using Facebook well. The study says that brands could theoretically amplify their message 81 times via friends of fans, highlighting the importance of properly hitting the target – if a brand has useless content on their Facebook Page that fans do not care about, the advantageous position is lost.

The study echoes what many have already asserted – a share is a much more relevant metric than a like, as there are 1.7 billion likes in a year, but far fewer shares. The study finds that if you target fans well, fans and friends of fans will spend significantly more money than regular consumers, proving that social media can, in fact, drive purchases. 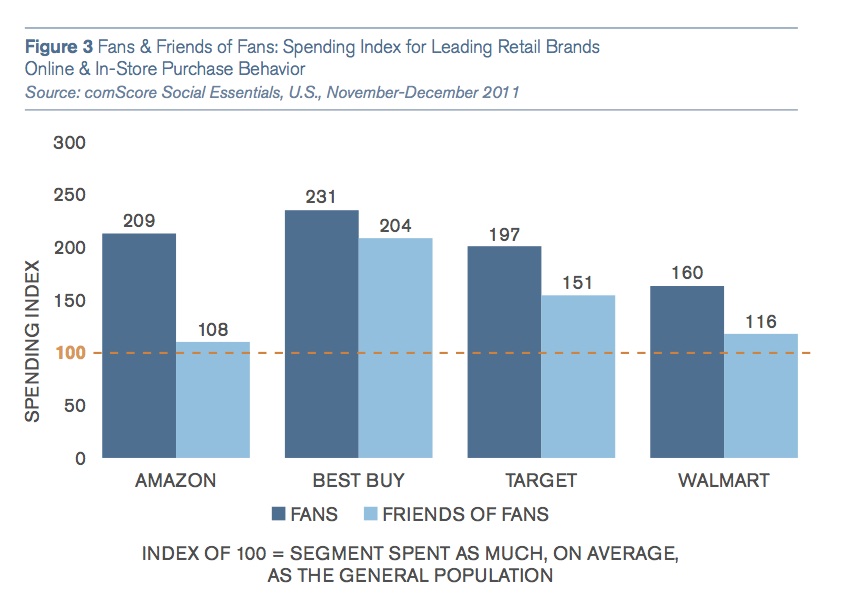 Four American retailers were analyzed by the study, revealing that just before Christmas, retailers’ use of sneak previews and Black Friday deal promotions on Facebook yielded great results – Best Buy alone saw fans and friends of fans spending double what the average consumer spent, and Target saw success as well. With all retailers, actual fans spent the most between fans, friends of fans, and regular consumers that are neither.

The takeaway is that quality content and promotions on a Facebook fan page can drive higher spends, and amplification (reaching friends of fans) is a more important metric than likes or shares.