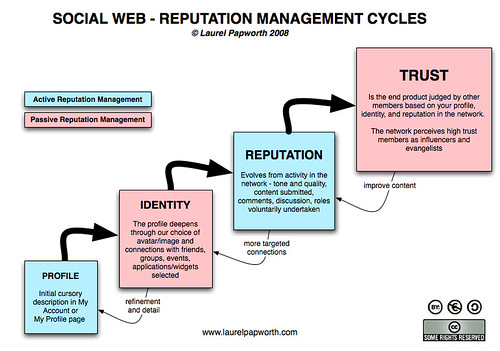 I received an email from my friend Chris Griffith the other day talking about on-line reputations, right after I had read an interesting post by Australian Social Media consultant Laurel Papworth   with the chart you see above. I really liked the chart, and was planning on using it in a Social Media presentation I’m giving next week , and I thought the chart did a great job of explaining how reputation attracts consumers by building trust. The topic wasn’t (in my small mind) specifically real estate related so I wrote a quick post about it on another one of my blogs.

To me it was a common sense type of thing so I really didn’t think much about it until this morning when I was on Facebook. As I was poking around I noticed one of my friends had joined Social Media Today. The name of the group was vague enough to make me look, so I went to see what was what – and lo and behold I found a study that actually quantifies the points made in my post and Laurel’s chart.

I love Being Right

When I read the article, I got really happy. I believe that there is a huge difference between what you thinknd what you know and as a result, I try to be careful to differentiate between opinion and fact. But when I saw Laurel’s chart, combined it with my own feelings about reputation and my experience as an employer, I knew  that being careful about how you manage your on-line reputation was an important thing for everyone to think about.

Through the magic of three stages of separation, I found a Facebook link to Social Media Today where there was a post about an article in Computerworld, quoting a survey performed by CareerBuilder.com. (Its only a couple of clicks to go a long way in the virtual world).

The Computerworld article provided empirical evidence based on a study of 31,000 employers conducted by Careerbuilder.com. In the study they found that reviewing Social Networks as part of the hiring process had doubled amoung this group in the past 2 years.

According to the article, these managers are using the social networks to find the following information;

Our potential employers, employees, associates, customers, and clients all have the same ability to check our backgrounds, and may be even more likely to do so than this group of management folks. Therefore it is imperative that we be aware of the consequences of posting things that may seem innocuous to us , but might be negative (or even offensive) to someone else,

MySpace and Facebook created a special club for the early adopters, but that’s all changed now. The good part about the phenomenon of Social Networking is that it has grown immensely, but with that growth grew a diverse audience, and the potential for unintended consequences if we don’t think before we type.

A Word to the Wise

So from the people who brought us the immortal phrases “Don’t Drink and Dial”  and “Don’t drink and Tweet” we have the new cliche “Think Before You Post” . Chose the information you want to share in the Social Networks carefully, remembering that you never know who is going to be reading it, and for what purpose.

Those of us who read and write in the Blogiverse have learned (sometimes painfully) that stuff you post on the Internet seems to be forever and that caution is indicated. But when we are young, invincible and immortal, we sometimes forget that the importance of thinking ahead.  No 20 year old getting a tattoo ever stopped to think about what that Ink would look like when they reach 55 or 60 (to the chagrin of more then a few folks) or perhaps they didn’t care. But putting something in your profile that might impact your ability to gain a client or a job, or recruit an associate is a bump in the road most of us would want to avoid.