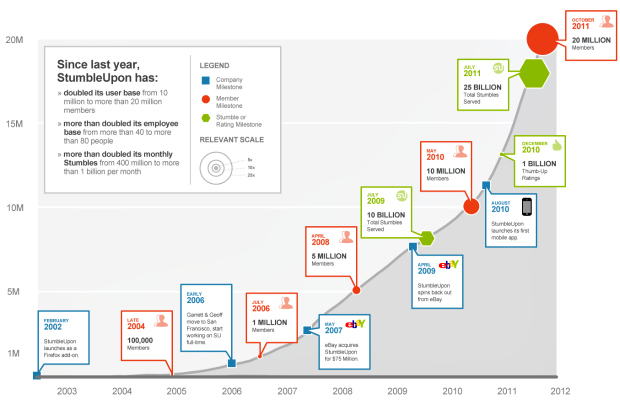 Personalized discovery engine StumbleUpon started as a simple extension and just a few short years later, they are now owned by eBay and enjoy 20 million users, 1 billion stumbles per month, and at peak times of the day see over 1,000 stumbles per second, a major growth milestone given that they had 800 million stumbles per month, back in April 2011. “Stumbles” occur when a user clicks a button and is presented with a website or page that reflects their preferences, so selecting business news and “stumbling” allows the user to click a button over and over to visit various sites and stories they might otherwise never have seen.

CEO Garrett Camp said, “When I recently came across a magazine clipping from 2003, it struck me that we now serve as many stumbles in a single hour as we did in our first year of existence! So it’s very exciting for us to reach such a milestone, all from the simple idea of ‘click a button, find cool stuff.’”

Number of users has doubled recently

StumbleUpon as doubled the number of users in just over a year and with their major round of funding, they have made a major mark on the mobile world, accommodating most smartphones on the market. Although 20 million pales in comparison to Facebook’s 800+ billion, 20 million makes StumbleUpon a major web contender, as its use becomes mainstream.

StumbleUpon is a useful tool for businesses that blog, check out our guide to using StumbleUpon for blogging (note: it was produced way back in 2009, so some features have changed, but the concept of how it works remains the same).

Camp gracefully thanked the StumbleUpon community by writing, “On behalf of the entire SU staff, I’d like to thank our community for letting us be your guide to the web. Your collective curiosity and passion for discovering new and interesting things is what keeps us going, and we will continue to focus on making your experience as good as possible.”

In this article:News, stumbleupon