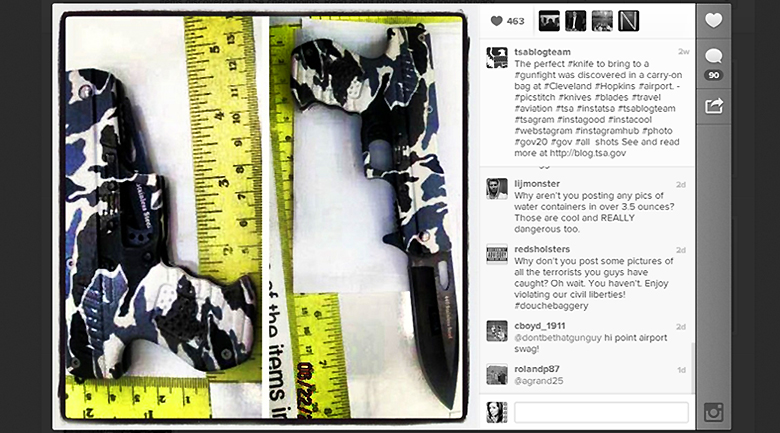 Last week, the US Transportation Security Administration began posting pictures of dangerous weapons the agency confiscated from around the countries airports. Among many other things, the “TSAblogteam” has posted pictures of guns, grenades, and fireworks alongside snarky, taunting commentary on each item.

This display of the arsenal is a great way to show just how America is being protected by TSA and that they’re not afraid to show what people are attempting to bring aboard US flights. And judging by the number of followers, the peoples’ interest has been piqued.

This isn’t the first time TSA has featured confiscated items. In 2008, the administration had a blog which showed the items as well. But with the success and breadth of Instagram, this new means of sharing the seized items has taken off.

According to TheVerge.com, “The launch of the TSA’s Instagram feed comes at an interesting period for the agency; just a few weeks after numerous public complaints forced it to retreat from a plan to allow small knives, baseball bats and other potentially dangerous sporting equipment back aboard planes for the first time since the September 11, 2001 terror attacks.”

It seems as though, however, this is a way of showing just how gutsy passengers are trying to be with attempting to bring certain weapons aboard. We all know what is banned not only at airports, but especially on an airplane. No one is taken by surprise that they can’t board an airline while carrying their knifegun in a holster on their leg. In fact, commenters on almost every photo chastise the TSA for other rules they feel are wrong or arbitrary, leaving the TSA social media team with the choice to ignore people interacting with them, or defend rules unrelated to the photo being shared.

Maybe it’s not such a good idea

Think of the copy-cats and the one the one-uppers who see the confiscated items on Instagram. Perhaps their interest is piqued as well? It’s not only us, the nosy public, viewing these pictures. How about the newscasts which tell, in explicit detail, how home pipe bombs are made? Could this possibly be a case for more attempts at weapons to be brought on planes?

Sure, the TSA is getting the word out and showing just how good they are at finding and confiscating weapons, but maybe they should lay off it just a bit as the bad guys may simply just say “challenge accepted” with detailed knowledge of what is and is not being commonly confiscated.

In this article:instagram, Social Media, tsa