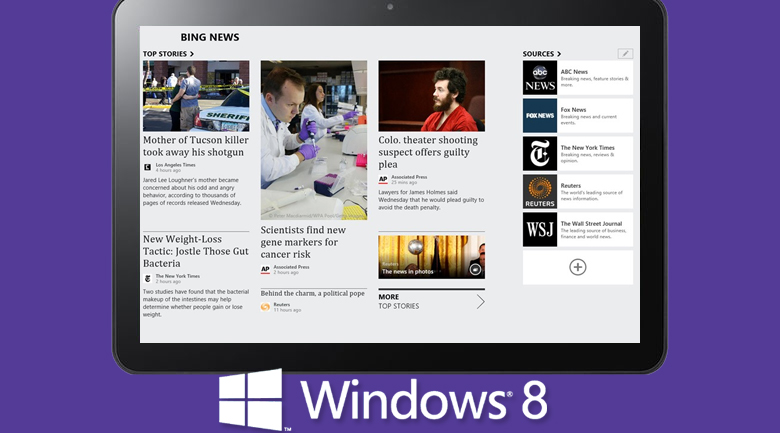 Last fall, six Bing Apps for Windows 8 were released – News, Finance, Weather, Sports, Maps, and Travel to “help you explore your world with a set of immersive vertical experiences,” the company said in a statement. “The apps were designed from the ground up to embrace speed and touch providing you with a fast, fluid and consistent way to delve into your interests and get things done.”

Since launching Windows 8, Microsoft has been frequently updating apps, today announcing the redesign of Bing News, Bing Maps, and Bing Finance, all including video tutorials for each app so users can get the full range of possibilities without missing any features.

In light of Google shutting down Google Reader, the most fascinating update to the suite of tools is the Bing News app which will now allow users to add their favorite RSS feeds to the “sources” list and place custom feeds on their start screen.

Additionally, the updated Bing News app will offer offline reading so users can load the app and then leave their wifi hotspot without losing their data, making it comparable to a traditional RSS feed, and while not completely a replacement, it is one step closer.

Why isn’t this a mainstream Google Reader replacement? It can’t take Google Reader’s place because it doesn’t sync read items with the Windows Phone 8 product, and there is no web-based interface to speak of, but it will most definitely help Windows 8 users to access information more effectively, which is a big win, even if not comparable to a traditional reader.

We can see that the Bing Apps are progressing quickly though, so it is possible that the Bing News app will sync in the future and become a substitute for RSS readers. With Google Reader shutting its doors for good this summer, perhaps the next version of Bing Apps will arrive at just the right time?